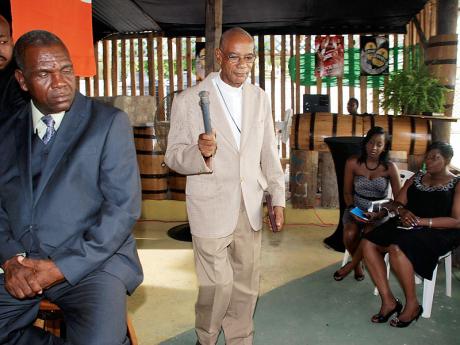 Considered one of the country's foremost religious thinkers and interpreters of the doctrine of creation theology, the Reverend Father Ernle Gordon has ended his stint as rector of the Church of St Mary The Virgin, but his theology remains as controversial today as it was in the beginning.

The man, once dubbed the 'Red Priest' because of his supposedly communist leanings, recently spared no punches as he took aim at church leaders during an interview with The Sunday Gleaner.

CONCERNED ABOUT SIZE OF MEMBERSHIP

Gordon said too many preachers are concerned about the size of their congregations, and as the number of worshippers dwindles, they have resorted to using fear tactics to lure people to Heaven.

"They have stopped teaching the gospel, and instead are screaming to conquer. It has not worked, and there is no need to use fear tactics. You discuss with them their lives, and then you nurture them."

The animated Gordon continued: "I don't think our churches in Jamaica have come to terms with creation theology, the dynamism that theology can give, the way in which the connection between creation, humanity and spirituality is presented."

The current host of 'St Mary's Moment' on TBC Radio said failure to make the link has caused the need to provide a Jesus with a dancehall effect.

"What has happened to some of our churches is that they have taken on a type of dancehall God. A dancehall Jesus -

That basis, he said, is to make converts into the image and likeness of God.

"He has put us in charge not to abuse nature, not to abuse people. If you abuse nature, you are abusing people, because nature and people are part of that creation theology. And that is why the churches are zooming towards that feel-good Jesus," he asserted, with 45 years of theological authority since his ordination.

Gordon said the move to create that feel-good Jesus can give no guarantees for a positive impact on the lives of the people.

"A dancehall Jesus is not lifting up anybody. It is just like going to the dance and you have a good time and an outing from home. But when it's done, it's done," he said.

Were Jesus to walk in the midst of Jamaica's churches, Gordon believes He would use parables, and let them see the folly of their ways, make them cry and seek forgiveness, and quietly rebuke them.

He said Jesus would not sanction any public stoning or offer hell and damnation rebuke, as "Jesus was as excellent in teaching as He was in preaching. But the pulpit today has left teaching, and gone to screaming".

The screaming, however, is not a recognition of failure on the part of churches and preachers to preach and teach. The screaming, he said, is deliberate.

"They (the pastors) have to go back to the depth of teaching and looking at how Jesus won people to Christ and help them to become apostles. They are not equating our Caribbean way of worship with the teaching," he offered.

Churches, he said, must not be seen as parson-dominated. Instead, they should be people-incorporated.