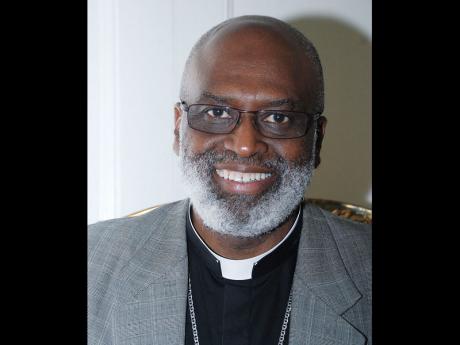 Visiting Archbishop of Accra, the Reverend Charles Palmer-Buckle, has urged Jamaican and African governments not to cave in to economic-muscle flexing from the British and American governments for a repeal of buggery laws.

Palmer-Buckle charges that attempting to dictate other countries' policies is a dangerous overreach of geopolitical power.

"I am concerned because the (Barack) Obamas and (David) Camerons and the rest do not only have a loud voice, they also have financial clout. What I am more concerned about is that these people are defeating the very democratic values they propagate.

"We are going to work hard to make our governments stand up for their sovereign rights and respectability. You cannot force people to do what they think is culturally unacceptable," Palmer-Buckle told The Sunday Gleaner during an interview in Kingston last Friday.

David Cameron, the British prime minister, used the pulpit of a Commonwealth Heads of Government meeting last year to nudge states to scrap buggery legislation he deems offensive, outdated and prejudicial. Failure to do so, Cameron warned, could result in the withdrawal of budgetary aid.

Buckle-Palmer, a 62-year-old Ghanaian cleric, is in Jamaica to participate in the Roman Catholic Church's celebration of 500 years of Christian ministry in the island.

He shares concern over the rising tide of secularism and atheism which have transformed Europe, once the cradle of global evangelism, almost into Christianity's graveyard.

Church attendance is dwindling in Europe and many places of worship are fast becoming merely places of architectural and historical interest.

But the Archbishop of Accra says the global Church will continue to withstand philosophical resistance - including from pro-abortion and gay-rights campaigners, movements he views as retrogressive and not progressive.

"These trends of atheism, hedonism and secularism are only leading to the degeneration of humanity, not a progressive development of humanity.

"[Traditional] marriage is what is healthy for the family, not (just) because God says it, but biologically. The Church is going to continue to propound these time-tested, perennial values," the archbishop argued.

The issue of gay marriage has dominated worldwide attention as the British government seeks to redefine marriage from being exclusive to heterosexuals.

United States President Barack Obama endorsed gay marriage in May, explaining that his position on the issue had "evolved".

Both governments have crashed into a pushback from church officials who insist that the gender and religious foundation of marriage would be undermined.

In the meantime, Palmer-Buckle believes Roman Catholic churches in the Caribbean, North America and Europe can learn from the evangelistic template of Africa, which has seen rapid congregational growth in the last two decades.

One factor which has sparked the fire of revival in African Roman Catholic churches is an emphasis on cultural relevance, the archbishop acknowledged. African Catholicism is "buoyant", even "sometimes growing too fast for qualitative faith formation".

"The Church in Africa is making greater effort to be more 'African' and less European. That means pruning off the unessential European trappings, Western cultural trappings, and putting in place African cultural values that could vehicle the same message of our Lord Jesus Christ," said Palmer-Buckle.