From Jamaica to France 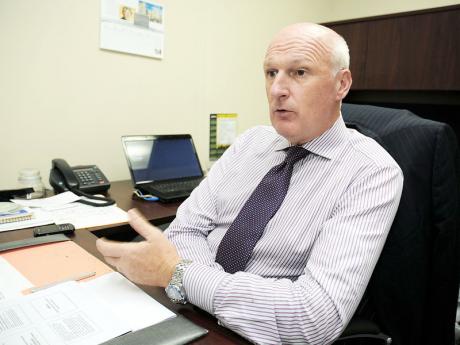 That is where Green will take up residence at the end of his stint with the Jamaica Constabulary Force (JCF) on July 15.

But before he says hello to the French, Green will be travelling to his native Britain to witness his son's graduation from Kent University.

Green was clear that he is not going to spend his retirement years in a posh chateau in France after the hard grind of policing in Jamaica.

"No! No! No chateau, just a small house that has a very big garden, and hopefully, there will be some wine nearby and a nice lifestyle to experience and live," Green remarked with a smile.

The former British cop is credited with bringing about significant improvements to Jamaica's criminal investigations, particularly homicides, during his time in the force. He was one of the chief organisers of Operation Kingfish, the intelligence driven task force that was set up as part of efforts to dismantle criminal gangs.

Recounting his sojourn in Jamaica, the former detective superintendent in the British Metropolitan Police Service said he came to Jamaica planning to spend only two weeks to set up Operation Kingfish, which was a collaborative effort among the Jamaican, Canadian, American, and British governments.

"However, I remained for eight years, which is much longer than I expected," Green stated.

He said 2011 was meant to have been his final year in Jamaica and the police force, but he decided to stay on until this year to "do some other work that has now been concluded. And now I feel that I have delivered what I was asked to deliver back in 2004, and more so in 2006 when I was appointed ACP."

Green was one of three police officers from the United Kingdom recruited to serve in the JCF as part of an initiative to modernise the local force and boost its intelligence and investigative capabilities.

The other two were Mark Shields, whose contract was not renewed in 2010, and Justice Felice, who remains with the JCF and heads its Anti-Corruption Branch. Another expatriate, Assistant Commissioner Paul Martin from Canada, was also recruited to serve in the JCF.

Green noted that his work at Operation Trident, an initiative of the London Metropolitan Police Service to deal with gun violence in black communities, prepared him for working in Jamaica.

In fact, it was because of his success at Operation Trident, where he had the full cooperation and confidence of the Jamaican community, that he was handpicked by the British government for the task of assisting the Jamaican authorities in setting up Operation Kingfish.

Having arrived in Jamaica in October 2004, Green was asked to stay on there for three years before he was promoted to the rank of ACP.

The father of two adult children wants to be remembered for the gains in criminal investigations, modernising, and developing the investigative capabilities of the JCF.

He is confident that his successor, ACP Jervis Taylor, will be building on the gains made over the years.

However, Green warns that the gains can be eroded, especially by politics, and pointed to the Jamaican phenomenon where once a new party takes power, "it clears out the old, and in doing so, sometimes kills the gains made over the years".