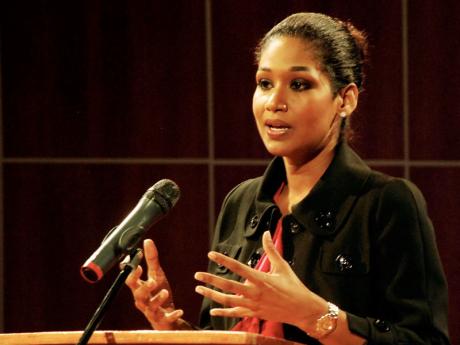 As calls mount in the public domain for the resignation of Youth and Culture Minister Lisa Hanna over her handling of the Jamaica 50 Independence celebrations, she is getting some backing from an unlikely source: her staunchest political critic, Olivia 'Babsy' Grange, the former culture minister.

Grange told The Sunday Gleaner that she would not go to the extent of calling for Hanna's resignation, but she wants the minister to come clean on the issue and take the lead in advancing the milestone celebrations.

"I don't want to attack the minister, and I am not going to attack her," Grange declared.

"All I am insisting is that we must all be honest and let the facts speak for themselves."

Members of the public who have been critical of Hanna's handling of the plans to celebrate Jamaica's 50th year of Independence have suggested that she should resign over what they characterise as the series of blunders that culminated in two "official" songs - Fly the Flag, commissioned by Grange, and I am on a Mission, subsequently commissioned by Hanna.

With an irate public breathing down her neck, and Grange accusing her of failing to accept her hand of fellowship in what should have been an occasion of national unity, Hanna, in an apparent bid to appease the fuming populace, has dispatched a statement saying that instead of a special song, the public would be called on to vote for an Independence song.

Grange, who started the celebratory plans in 2010, said this was no time to initiate controversies. "All I am doing is defending my legacy," she said.

The former minister has been forced to share some of the blame, with some Jamaicans accusing both politicians of playing politics, a charge that they have rejected.

Arnold Bertram, a former minister, parliamentarian, and renowned cultural and political historian, is in harmony with Grange.

He is of the view that the Government, led by Hanna, must seize the controversy by the scruff of the neck and go out of its way to facilitate a healing process.

"The Government has a responsibility to lead to a process that will bring healing, and the ministers, in particular, must lead ... . All players should be anxious to arrive at such a healing," Bertram declared.

"Once the Government shows sincerity about healing, I am confident that it will be successful."

As to whether Hanna should throw in the towel at this time, Bertram was forthright.

"I don't even want to go there at all in that as far as I understand, this is Miss Hanna's first ministerial responsibility," he said.

"It's a matter of a learning process. She is a bright, young Jamaican that Jamaicans need to help to get further along the road. I think we arrive at condemnation far too quickly, but she must just move on from here and lead the healing process," stressed the former minister in the 1990s People's National Party administration.

For her part, Hanna had initiated a recent meeting to facilitate closure of the dispute ahead of the start of the Independence celebrations. But Grange said a joint communiqué agreed at the meeting never reached the public.

She adamantly refuted claims that she had refused to sign the communiqué.

"A draft of the joint communiqué was sent to me. I made suggested amendments and sent it back to the minister with the expectation that they would get back to me. They never got back to me ... . They severed communication and the communiqué was not dispatched to the press."

Grange described as "quite minor" the differences between herself and Hanna regarding the contents of the communiqué.

"I simply called for specifics in relation to the song Fly the Flag to ensure that it would definitely be used," she said.

"The minister had simply said at the meeting that the song would have been used where appropriate. There was no definite commitment."

Grange said she had also proposed another amendment to the communiqué because the impression was being conveyed that she had been given a mere $35 million dollars to finance an elaborate affair.

"All I wanted to say was that they rescope the programme to include events and activities which were initiated by the previous administration, including the 'Jamaica House at the O2' concept denoting that the Jamaica 50 area in London was a stone's throw from the Olympic Village," she said.