Last chance for WI to deliver 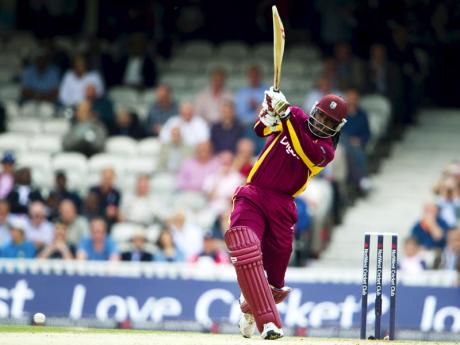 Chris Gayle ... will be a key man today.

NOTTINGHAM, England (CMC):Embattled West Indies will wrap up a strife-filled two-month tour of England here today, hoping they can finally break out of their wretched slump with a win in the lone Twenty20 International at Trent Bridge. (Match starts 8:30 a.m. Ja time).

The tourists have been riddled by injuries, harassed by late spring rain, but most of all, completely outplayed by a confident English unit in both the Test and One-Day International series.

Their only win on tour has come in a warm-up one-day match against a weakened Middlesex side at Lord's, hardly a result to take comfort in.

Today's T20 against the reigning World champions will, therefore, take on significant value for the Windies as they seek to leave the tour with something to show for their efforts.

Head coach Ottis Gibson said while the results had been disappointing, his side would be focusing on putting a solid game together.

"For us, it's just trying game after game to get the right balance in the team and to try and win a game," Gibson told reporters.

"Obviously, the T20 format suits us. England are still the World champions so we look forward to Sunday and the T20 as well."

West Indies will back themselves to upset England, especially with several of the Indian Premier League, stars in their side.

Big-hitting left-hander Chris Gayle, topped the run charts with over 700 runs while mystery off-spinner Sunil Narine was voted Man-of-the-Series for his 24 wickets.

All-rounders Kieron Pollard, Dwayne Smith, Marlon Samuels, André Russell, and Dwayne Bravo all campaigned in the cash-rich league and will bring their experience to today's encounter.

However, Gibson cautioned that his players needed to play hard cricket as there was a huge gulf between the IPL and international T20s.

"Not only have they noticed (the difference in quality), but it is quite noticeable," Gibson noted.

Following a 0-2 loss in the three-Test series, West Indies entered the one-day series with the tag of favourites but suffered comprehensive losses in the first two matches before the final game on Friday was rained out in Leeds.

Neither the Windies' batting nor its bowling has fired, but Gibson said it was in the bowling where adjustments needed to be made.

"Looking at all the players we have, and we have got quite a few all-rounders ... fitting all of them into one XI is a challenge, and, therefore, if they all play, we have to understand that different people will have to do different roles in terms of our bowling," he explained.

As usual, much attention will be centred on Gayle, who gave a taste of his explosive ability with two fours and five sixes in a whirlwind 53 in the second ODI last week,

"He's always been that top billing, and it's good to have him back. We all enjoyed having him around. It's just a shame he got out at the time when he did," Gibson said.

England, meanwhile, are bubbling with confidence following their domination of the Windies in the preceding Tests and ODIs.

Captain Stuart Broad, however, admitted they were wary of the threat posed by the Caribbean side, especially with Gayle back in the fold.

"They've got some world-class players in the Twenty20 format. It's hard to look past Chris Gayle as one of the best Twenty20 batsmen in the world," Broad noted.