One more reason for goal-line technology 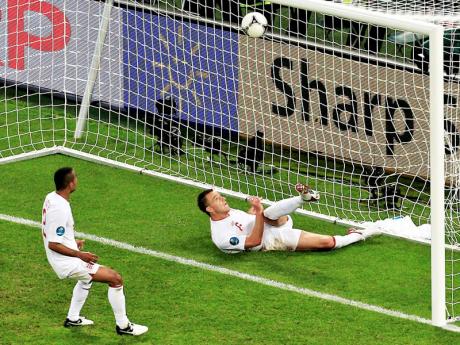 England's John Terry clears a ball that went over the line during the Euro 2012 football championship Group D match between England and Ukraine in Donetsk, Ukraine, on Tuesday, June 19. -AP

EURO 2012, the football championship that is regarded, particularly in Europe, as second only to the World Cup, is in its quarter-final round, and if you were to ask anyone, anywhere in the world, from the Caribbean or the Americas, from Africa or Asia, from Europe or from South America, who will win it, he would likely, more than likely, at least up to the start of the tournament, answer Spain or Germany.

Holland, one of the favourites at the start of the tournament but surprise losers of all of three first-round matches, are out of it, and Portugal, victors over the Czech Republic in the first match of the quarter-finals on Wednesday, are still in it.

The other contenders, those who were down to contest the other three quarter-final matches, are Spain, the defending champions and the defending World Cup champions; Germany; France; Italy; Greece; and England.

England, however, as good as they are, with all the pedigree they possess, are probably lucky, very lucky, to reach the quarter-final stage of the tournament.

After defeating Sweden 3-2 and drawing 1-1 with France, England played co-hosts with Ukraine and won the match 1-0 to top the group and to advance to the quarter-finals.

No one knows what the result in the match would have been, but it is possible that Ukraine could have won the match.

More important, however, had Ukraine defeated England, had the France/Sweden match ended the way it did, Ukraine would have gone through as leaders of the group leaving the tiebreaker to rule between England and France.

And the match could easily have ended in a win for Ukraine.

England led Ukraine1-0, but Ukraine scored a goal which England's John Terry cleared after the ball had crossed the line.

Had the referee, or the assistant referee on the goal line, given the goal, the score then would have been 1-1, and although that would not have meant that the match would have ended on that score, or that Ukraine would have gone on to win the match, it is quite possible.

What was definite, however, was that the incident occurred at a crucial stage of the match, and Ukraine, who had the better of play throughout the match, were on top at the time.

The incident, however, strengthens the call for goal-line technology.

One thing is sure, based on what is written in newspapers and magazines, based what is said on radio and on television, and based on what is heard is discussions everywhere, the experts and the fans want goal-line technology, and they want it as quickly as possible.

They want the rules of the game to be applied as fairly as possible, and they want the consistency of technology to determine that as far as technically possible. They do not want, in this day and age when so much money and so much prestige are at stake, to depend on the inconsistency of man, on the eyesight of man, or on the reflexes of man to decide whether something as simple as a ball crossing a line has happened or not.

Goal-line technology may disrupt the flow of the game, it will not be cheap, and certainly it cannot be used for every football match.

For those matches, however, those tournaments which are money-spinners and those which are important, very important, to the people, it must be used, sooner or later, cost or no cost, Platini or no Platini.