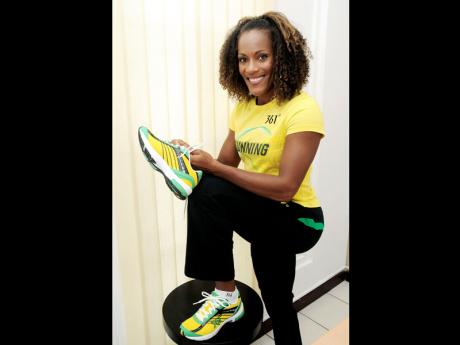 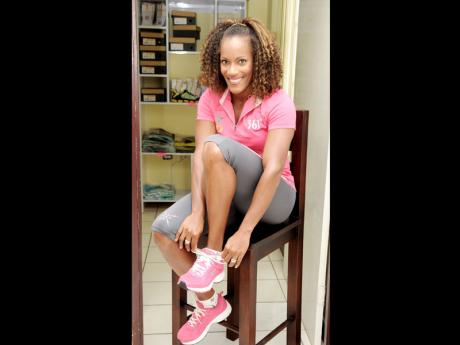 Jamaica's hurdling ace Brigitte Foster-Hylton in her new outfit made by her kit sponsor, 361 Degrees.
1
2

As she prepares for what she says is her final attempt at an Olympic medal in London this summer, Brigitte Foster-Hylton, the 2009 100-metre hurdles champion, knows there is one less thing to worry about as she gets ready to take on the rest of the world in just over a month's time.

Having to focus on technique, strength, and her overall execution, she is unconcerned about her kit sponsor, 361 Degrees.

"What's most beautiful about 361 is that I have had an input in everything they've made so far. I mean they know what my favourite colours are, and they have worked with it. You know, the designs, they have put butterflies on my tights because they know I love butterflies. So I am really having fun with them," she said, the excitement very evident as she donned her new gear recently for the first time.

The athletes were signed to three-year deals as 361 launched its campaign to raise its profile outside of China where it is the third- largest sports apparel company. But, in Jamaica, the current sprint capital of the world, they wanted a greater connection with the country; they sought a fusion with the Chinese and Jamaican culture.

Through VAST Incorporated, 361's agents here in Jamaica, they took what is seemingly a big step in the right direction. "361 have always wanted to create a Chinese-Jamaican fusion of their design elements. They already had their catalogue, but they wanted some local input, so they asked VAST to come up with something," revealed VAST representative Ajani Williams.

So in February this year, Williams got a hold of 361's catalogue, and with the help of Kemar Swaby, they set about to 're-engineer' the original designs in the 44 pages of the catalogue.

"We started by tweaking the colours and making them softer, integrating new colours into the green, yellow and black and coming up with more creative designs," Williams said. "We added the image of a lion to the back of Michael Frater's outfits, created the concept of butterflies which symbolises femininity and strength of a woman. We also added pinks, purples, and blues for the women."

"It is that personal individual style that makes us Jamaican. We all want to be unique," he said. "So you won't see all 361 athletes wearing the same designs."

Quite by chance, they also ended up adding something particularly unique to Jamaica. Swaby was asked to find something that would add a distinct Jamaican feel to the gear, and he returned with what turned out to be the logo that is being used for the Jamaica50 campaign.

"We thought it would be good for the athletes and great for the country," Williams revealed. "That really helped pull everything together. nothing was more Jamaican than that logo, and they made the gear commemorative pieces for Jamaica's 50th year of independence."

Even though after the fact, VAST eventually received permission from the Jamaica50 Secretariat to use the logo.

Foster-Hylton was pleasantly surprised. She spoke of how she responded when she first saw the new designs.

"Wow! These are pretty!" she said. "I feel I am the envy of my training session actually, but I am really pleased and impressed with what has been done so far, and I think that this is just the beginning. it's only going to get better."

She was also very moved by the placing of the logo on the outfits.

"That was absolutely fabulous, great timing. That was very thoughtful of them. I can represent the history of my country as well as represent their brand."

The early success and positive response to the new designs, Williams said, is 361's way of showing that they are not just a sponsor, but that they want to intertwine with the fabric of Jamaica by forming long-term partnerships, forging relationships between both countries and the athletes, and making a mark in Jamaica's 50th year of independence.

"I'll try to be professional and get the job done, and hopefully, get some great performances and represent them well on the world stage," Foster-Hylton said. Based on her remarks, it seems as if 361 is off to what the veteran hurdler will most hope for in London this summer: a great start.