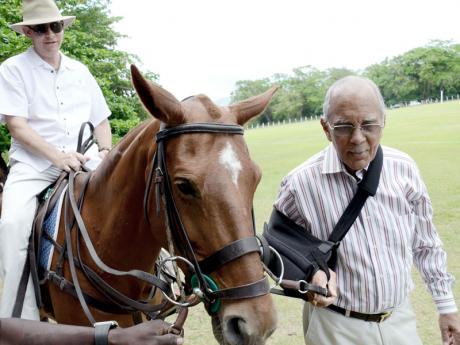 The Dennis Lalor Polo Tournament, featuring a mix of experienced players and the youngsters, takes place this afternoon at the Kingston Polo Club, Caymanas Estates, starting at 3 p.m.

As many as six to seven teams will contest the tournament, which is staged annually to mark the birthday of the Hon. Dennis Lalor O.J. in June.

Lalor represented his country with distinction in many international tournaments for 40 years.

His association with equestrian sports also extends to horeracing. Lalor was chairman of both the Jamaica Racing Commission and Betting Gaming and Lotteries Commission for years from the late '70s to 1990.

His company, ICWI, has assisted polo in Jamaica through sponsorship of several tournaments.

Kingston Polo Club's top player, Member of Parliament James Robertson, will miss the tournament. Fong-Yee disclosed that he is still recovering from a broken leg sustained in a polo match some weeks ago.

Meanwhile, the top players in the island are gearing up for next month's tour of the island by the Zimbabwe polo team. They will play a number of matches against Jamaican teams from Friday, July 6, at the St Ann Polo Club, Drax Hall, to Sunday, July 15, at the Kingston Polo Club.