No sweat for champs Spain 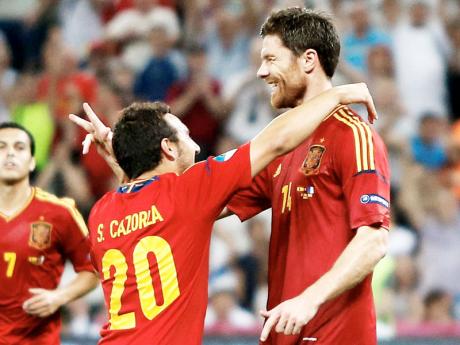 DONETSK, Ukraine (AP):Xabi Alonso scored two goals in his 100th international appearance yesterday, leading Spain to a 2-0 win over France and a spot in the European Championship semi-finals.

Alonso first scored with a thumping downward header in the 19th minute and then converted a penalty in injury time.

''We knew this was the most important match and we played very well,'' Alonso said. ''Scoring the early goal really made things easy, so I must say we're happy.''

The win was Spain's first over France in a competitive match in seven attempts. Spain will next face Portugal on Wednesday in Donetsk in the semi-finals as they bid to win a third straight major title.

''When you lose a game there's always something missing, I'm not sure if it's possession or technical ability,'' France coach Laurent Blanc said. ''The lads gave everything and it's very hard to play against Spain. We blocked their left flank, which is their strong point.''

The opening goal was the result of excellent one-touch football - the hallmark of Spain's game. Andres Iniesta prodded the ball through for Jordi Alba, who whipped a perfect cross from the left to Alonso. The Real Madrid midfielder timed his run so well that no France defender picked him up.

''He knows how to sacrifice himself, help the team and where to play,'' Spain coach Vicente del Bosque said. ''He is one of the attacking strengths of ours. He knows how to create and finish.''

France's only shot on target came in the 32nd minute when Yohan Cabaye's free kick was tipped over by Spain's goalkeeper Iker Casillas.

''They were there for the taking,'' Blanc said. ''We knew we would get some chances, and the only thing I regret is that they scored off their first good chance. If we had gone in level at 0-0 at half-time, then I think we would have had more room in the second half.''

The match was sometimes dull, but the Spanish did not really need to change gears after Alonso's opening goal.

Although the French made it out of the group stage for the first time since the 2006 World Cup, the manner of yesterday's loss will be disappointing for a team touted as one of the tournament's dangerous outsiders.