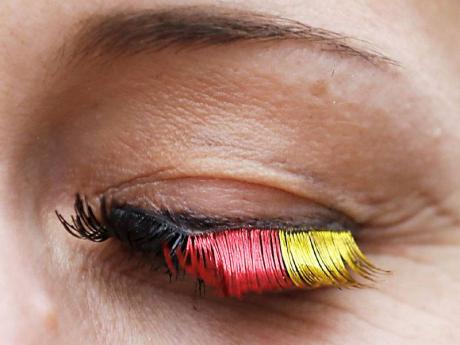 A German soccer supporter sports eyelashes painted in the colors of the national flag prior to the Euro 2012 soccer championship quarterfinal-match between Germany and Greece in Gdansk, Poland, Friday, June 22. 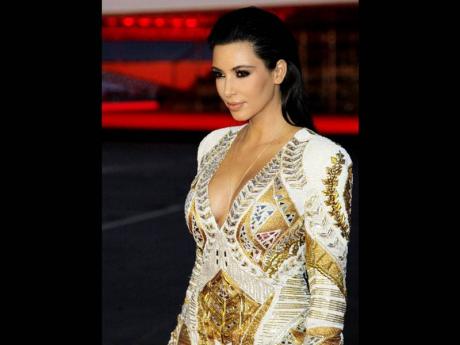 From the runways in New York to the red carpets in Hollywood, women are sporting bright shades of lipsticks, and messy updos as buns or flirty braids. This May 23, 2012 file photo shows reality star Kim Kardashian sporting the trend. FILE Photos
1
2

This summer's beauty trend is bold and bright, yet simple and playful. From the runways in New York to the red carpets in Hollywood, women are sporting bright shades of lipstick and messy updos as buns or flirty braids.

Celebrity make-up artist Matt Rezaiyan insists the new lip colour trend works on all ages: If it's bright pink, orange or red on younger women, just use a lighter version in the same bold colour family on more mature women.

"This summer's make-up trend is all about colour which makes doing make-up even more fun, so, do not be afraid of going bold with the eyes and if you are more of a lip kind of girl, no problem, just tone down the eyes and maximise on the lips. Try colours you have never done before like a bright pink, a coral, a tangerine, orange; anything that you thought you never could get away with, you totally can this summer," says Rezaiyan. "We have seen celebrities like Jennifer Lopez, Scarlett Johansson and Rooney Mara even wearing these pops of colour, so definitely don't go shy on that."

"I think I like to do a strong lip and a little bit of an eye but not too much. Clean skin," says Meester. "I like to ... not have to worry about wiping creases and worrying about things running."

Kim Kardashian puts her colour elsewhere, often blending different shades for a smoky-eye effect accompanied by a nude lip shade. If this is your preference, Rezaiyan says the perfect smoky look for this summer is based in blue.

"The best way to do it honestly is to get yourself some cream shadow, work that on the lid, just smoke it out, take a powder shadow that has a blue tint to it with a different brush and just kind of go over it again in the same area. That will kind of give it that blue tint," he says.

Jet-setter Paris Hilton usually vacations during the summer months and prefers to keep her look natural.

"In the summer I am always in Saint-Tropez and Ibiza so I don't really wear any make-up, I just wear lipgloss, a little mascara," says Hilton. "I like to wear my hair in braids because you can just easily take it out, it has that pretty wave to it. You are always swimming in the ocean, you are always out, so it's not really good to blow-dry and flatiron your hair during the summer."

Renowned hair stylist José Eber is taking cues from New York Fashion Week, which had many runways with an undone vibe. Eber says this summer is all about texture, messy dos and pastel colour rinses.

Where else to make a statement? Nails.

TV personality and fashion designer Whitney Port sported short, dark, rounded nails with her thumb coloured half-silver and half-gold. "Yeah, I think nails are just a fun way to accessorise an outfit, like they are the new accessory. It's fun to funk it up a little bit."

"I've always been a big fan of bright colours because I think that when you look down at your nails during the day, having a fun colour that pops really brightens up your mood, especially if you are working nine to five you are usually just kind of typing and you are like, 'Yay, pink, pink!'" says Asemanfar.

"My friend has a Pinterest site for nails and so I just go on and pick something and pick out my own colour and say 'do that' and they can do anything, I swear," says McKee.

Pop artist Ke$ha had black diamond-shaped nails with gold borders. "I was kind of going for like sexy witch or naughty flower child."

But before you can go there, you need the right canvas - and that goes for nails, hair and skin.

Those bases need to be healthy, the experts say, recommending lots of water, SPF and moisturisers.