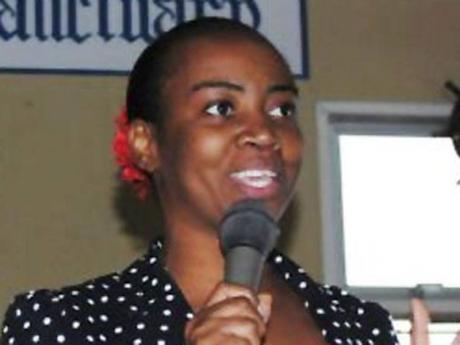 TEARS FLOWED freely as grief-stricken members of Harrison Seventh-day Adventist Church, Catherine Hall, St James, wept openly with some persons rolling on the floor, as news of the gruesome death of 37-year-old teacher Tania Christie-Lowe, a member of that congregation, reached them Saturday evening.

The Granville police reported that Christie-Lowe returned home from church about 7:20 p.m. and entered her house. Seconds later, neighbours reported hearing loud screams coming from her house. The police said about 7:40, neighbours saw Christie-Lowe lying in the front of her yard and summoned the police.

On arrival of the police, she was found lying face down in a pool of blood with a stab wound to the left side of her neck. The house appeared to have been ransacked.

Up to press time, a motive had not been established for the killing.

"She will be sadly missed. A vacuum, on the choir and the praise team. She was unique and nobody can fill that vacuum," said one of the young members of the church, her voice tinged with grief as tears streamed down her face.

The distraught pastor of the Harrison Seventh-day Adventist Church, Robert Vassel, said his congregation has been terribly shaken by the death of Christie-Lowe.

"Since the church learnt of her sudden passing, the emotion of the church has been radically altered. Everybody is probably at the highest point of grieving right now. She was an invaluable member to us. She was not just a member of the church, but she contributed significantly to the programming of the church.

Vassel added: "She assisted in the Children Ministry's Department and the children are torn to pieces emotionally. She was one of the praise team leaders in the church, so she contributed significantly in the area of music. So her sudden passing and the way she has passed make it even more devastating to the membership of the church."

Christie-Lowe, up to the time of her death, taught social studies at Harrison Memorial High School, sang on the choir at the church, and was also the director of the church's children's choir.

A distraught member of the church who declined to give his name described her as a loving, caring person who was very active in the church.

"She came back the evening to train the choir for Harvest, which is for this coming Saturday, and after doing that, she left church minutes to seven. When the church body heard about her death, they were having a board meeting and it was cancelled because of the crying and weeping. People wept openly, some bawl out. She had such a beautiful voice."

The Gleaner understands that Christie-Lowe's house was broken into weeks ago, and a computer and other household items were stolen.

Christie-Lowe's death comes hot on the heels of the murder of Trindadian Michelle Coudray-Greaves, who taught briefly at Cornwall College and whose burnt remains were found in a cane field in Montego Bay recently.