Get ready for Jamaica Military Tattoo 2012 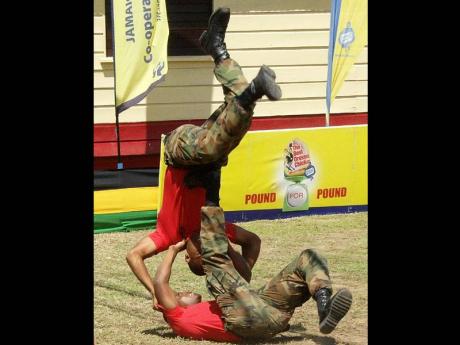 Members of the Jamacia Defence Force (JDF) go through one of the routines that they will be displaying during the Jamaica Military Tattoo 2012 during a media launch at Up Park Camp in March. - Ian allen/Photographer

ANTICIPATION IS building for the staging of Jamaica Military Tattoo 2012 (JMT 2012), which gets under way on Thursday.

Major Kevron Henry, assistant event director and officer with responsibility for the operations of the Tattoo Secretariat said the event is the Jamaica Defence Force's (JDF) way of celebrating not just Jamaica 50, but the army's 50th anniversary.

"It's a chance for the Jamaican people to see what their JDF can do. But there is also the showing of the other side, so you have the musical spectacle and all the other elements."

The other activities will include physical-education drills, quasi martial arts demonstrations and military-drill routines.

The term 'tattoo' is derived from the Dutch phrase doe den tap toe - turn off the taps, which was communicated by drumbeat (and later by bugle call) and warned innkeepers to turn off the beer taps and soldiers to return to their quarters for the night. Today, it has evolved into an elaborate display of marching bands, precision drill movements and dynamic military displays, as well as performances by other organisations and agencies. To stay true to its roots, the Tattoo takes place in the evening hours.

"The evening was the time the armies would take stock of the day's fighting. They would count their losses and even pray for the souls of the deceased."

The event will start at 7:30 every night. The JDF is expecting 8,000 persons per night.

The theme for the 2012 event is 'The First Five Decades: Precision, Pomp and Pageantry' and will be held at the Polo Field in Up Park Camp. Aside from the JDF, the Jamaica Constabulary Force, the Jamaica Combined Cadet Force and the Jamaica Fire Brigade will also be taking part. But there will be a foreign flavour to the Tattoo.

The Canadian Forces' composite Pipes and Drum Band will grace the stage at the JMT 2012 and provide patrons with a distinctive musical and visual treat. The British Armed Forces' Royal Marines Band Service is world renowned for the quality of the musical and visual splendour of its marching bands and versatility in performing a wide range of musical styles to a high standard on the concert platform.

From the United States of America (USA), the District of Columbia National Guard is a federal military entity that reports directly to the president of the USA and is assigned the moniker of 'Capital Guardians'. Known for their precise military music, soul-stirring jazz and popular music renditions, this multitalented group will add their own indomitable style to the stage of the JMT 2012. Troops from the People's Republic of China will also be performing martial arts.

The Caribbean will also be represented nicely. The Trinidad and Tobago Defence Force Steel Orchestra will bring its music, colour and lively show to Jamaica for the first time ever. The Guyanese Defence Force (GDF) will treat patrons to an amazing parachute-jump display courtesy of their renowned GDF Paratroopers. They are known for jumping with colourful parachutes from as high as 12,000 feet, performing many different skydiving displays such as tandem jumps and free-fall demonstrations.

The Bermuda Regiment or the Band, as it is called, has musicians ranging in age from as young as 16 all the way up to 61. The 35 part-time and dedicated musicians who comprise the Band juggle their regular employment with a demanding military schedule that oftentimes see them performing up to five times in a single week.

Major Henry also noted that there would be a Tattoo Village that would be open from 3 p.m. on every day of the Tattoo. The village will have not only displays from the JDF units, but also from the various sponsors.

There have been four Tattoos in Jamaica's recent history. The first was in 1933. The second was in 1953, then another in 1968 and, finally, the last one was in 1983. That one, the 21st-anniversary Tattoo, was of special significance to the JDF, as the show also coincided with the 21st anniversary of the force's inception.