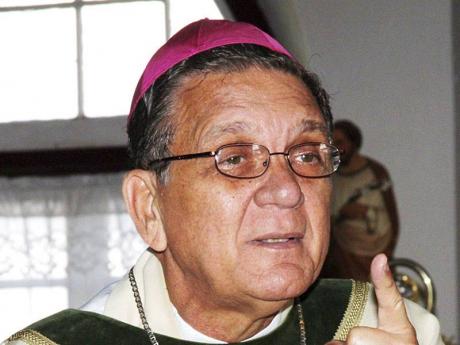 AS THE Catholic Church celebrates its 500th year since the introduction of the faith to Jamaica, Archbishop of Kingston, the Reverend Charles Dufour, has said the paedophilia scandals that have rocked several member churches worldwide over the years can shoulder some of the blame for the poor following it has managed to wreak after five centuries in Jamaica.

In a nation with a population of 2.7 million and where Christianity stands as a giant among all other religions, to date, only 67,000 persons in Jamaica can be counted as Catholics, according to Reverend Dufour.

But while acknowledging the debilitating impact that the stains of paedophilia have left on the Catholic Church in Jamaica and across the globe, Dufour said the migration of many Catholics is also a factor.

"The diaspora is very large and a lot of our members have migrated."

Dufour was speaking with The Gleaner in an interview on Saturday. He said while the church does not condone the actions of priests who have been implicated in paedophilia over the years, he believes agents of society have used this as a pillow to launch attacks against the church.

"We have had a lot of scandal in the States (United States of America) for example, you have 47,000 priest, you don't have two per cent involve in this sort of thing, but the press plays on the misdemeanours of a few. The misdemeanours are wrong, but there are thousands of priests who are living faithful lives, and we don't focus on that. The press tends to focus on things that grab headlines," the Catholic priest said.

Dufour said one of his greatest concerns for the country is the issue of unwanted children.

Dufour lamented: "It's not the (responsibility of the) Government to bring up the child, not the private sector. You as a parent must take responsibility and in many instances the responsibility is not being taken. There are too many unwanted children in this country."

In the meantime, he said that while the Catholic Church does not condone homosexuality, the church is calling on Jamaicans to treat with respect those who have embraced the lifestyle.

"We do not regard homosexuality as natural behaviour, but we say you are to respect the person. Respect, do not kill the person, do not stab the person. You must show respect to the person. ... We have always maintained that stance and we will never change that."