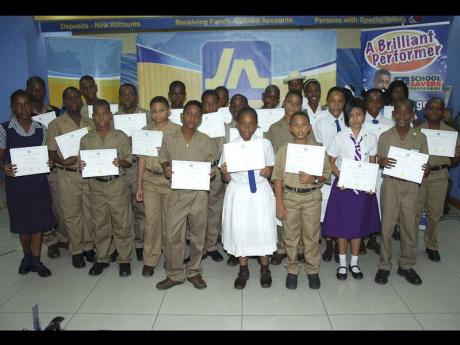 In recognition of the 50th year of Jamaican Independence, the Jamaica National Building Society (JNBS) will award 50 new scholarships and bursaries to secondary and tertiary students for the new academic year, 2012.

These awards, which are an increase of 12 over the previous year, are in addition to 92 existing five-year scholarships, at the secondary level, issued throughout the past four years, and which are renewable annually.

"The annual awards are a feature of the society's focus on the development of our young people, who go on to make significant contributions to our country upon completion of their studies," said Earl Jarrett, general manager of Jamaica National.

He said that Jamaica National was committed to provide the support our young people need in the pursuit of their academic dreams.

"Since 1983, the society has been providing financial support to hundreds of students to complete their secondary and tertiary education, under the auspices of the JN Scholarship Programme," Jarrett disclosed.

Currently, five-year scholarships are awarded to 14 students each year, one from each parish; and 10 children of JN employees who have performed outstandingly in the Grade Six Achievement Test (GSAT). Additionally, three GSAT students, one from each county, who are active participants in the Society's Schools Savers' Programme, are also awarded scholarships.

In respect of the selection process for the scholarships and bursaries, Tanya Pringle, communications manager, JNBS said, "The Ministry of Education identifies the recipients of the GSAT scholarships based on their performance; and employees are encouraged to apply on behalf of their children once they attain a minimum average of 85 per cent."

"The scholarship has motivated and encouraged me to continue working hard," wrote Kerry-Ann Lewis, a sixth-form student of Hampton High School, who was a recipient of a 2007-2011 scholarship from the JN Society.

She plans to study actuarial science, to obtain the qualification to become a software engineer.