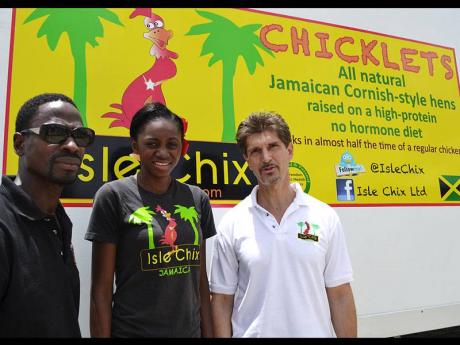 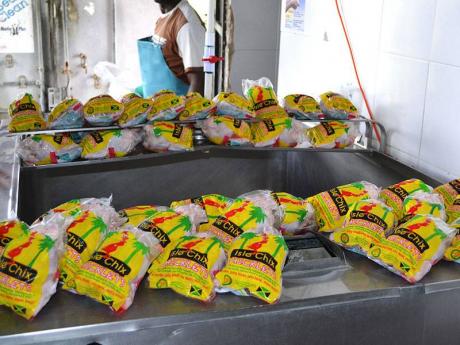 Chicklets packaged and ready for the market. 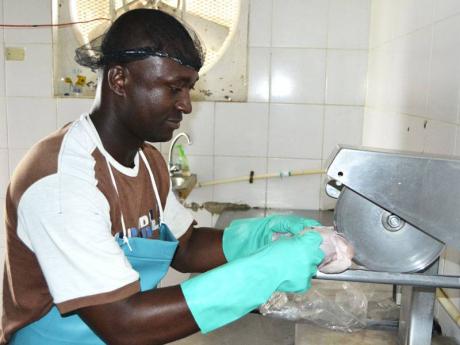 Larkland Brown cuts the chicklets to be packaged after processing at the Isle Chix poultry farm and processing facility in Clarendon. - Photos by Errol Crosby/Freelance Photographer
1
2
3

Tasty, delicious and ready in half the time it takes for a regular-size chicken, are just some of the advantages of Isle Chix Chicklets, the newest brand of cornish-styled hens that will put your restaurant or dinner table a cut above the rest.

Isle Chix Limited is a poultry-production and processing facility located on six and a half acres of land in Osborne Store, Clarendon. It comprises six poultry houses, a processing plant, a three-pond wastewater treatment system, back-up generator and a 40-foot freezer.

This project is the brainchild of Greece-born Alexx Antaeus, an award-winning music composer and producer who has a vested interest in making the business successful. The enterprise currently rearing over 50,000 chicklets is reaping benefits. The chicklets, which weigh about 24 ounces each, are catching on with the Jamaican consumer.

Antaeus actually started rearing regular chickens, but soon discovered that he could not compete with existing players in the market.

Rearing the chicklets takes three and a half weeks. Antaeus receives them from the factory at a day old, and the feeding, processing, storage and trucking are done at the farm.

Antaeus said he is contemplating diversifying his range by adding a smoked flavoured variety for the local and international markets.

"The smoked chicklets are put in a marinade for 10 days, smoked and vacuum-packed. Smoking is done at the Scientific Research Council, but we are looking to build our own smoker soon," Antaeus said.

Smoked chicklets are expected to hit the market in about two months. Research, he said, is now being conducted in markets in South East Asia, the United States and the Caribbean. The Isle Chix brand will be marketed with four other Jamaican products in these markets. The five will be branded as 'Jamaica's Best Five' and also includes Rum Fire Rum, Excelsior Water Crackers, Wallenford Coffee and Guavaliciously Irie Matie Sauce.

The cornish-style chicklets are sold for $370 in Losushan Barbican, Lee's, Red Hills Road, and General Foods supermarkets. Very soon, the product will be available in Hi-Lo outlets and MegaMart in Kingston and Montego Bay. He is also in negotiations to partner with Best Dressed Chicken to develop poultry products.

Isle Chix Limited can be reached at: jamaica-jane@islechix.com.