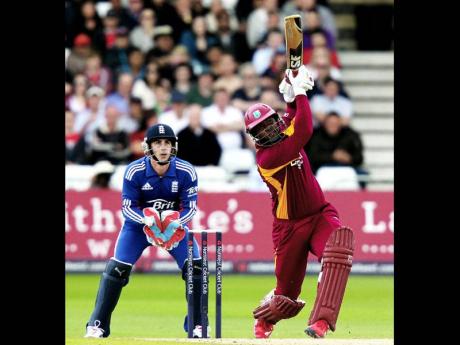 Scintillating half-centuries from Dwayne Smith and Dwayne Bravo were not enough to save West Indies from a seven-wicket defeat in their one-off Twenty20 International as they completed a wretched, winless tour of England here yesterday.

Smith lashed a flamboyant top score of 70, while Bravo chipped in with a stroke-filled unbeaten 54 to propel West Indies up to 172 for four off their allotted 20 overs at Trent Bridge.

Alex Hales then posted England's highest-ever individual T20I score with 99 as England cruised to their target with two balls left in the innings.

They lost Craig Kieswetter for three in the third over with the score on 10, but Hales put on a rollicking 159 for the second wicket with Ravi Bopara, who hit 59, to snuff the life out of West Indies.

The right-handed Hales struck six fours and four sixes off 68 balls before he was yorked by pacer Ravi Rampaul off the final ball of the penultimate over, with three figures in sight.

Bopara, meanwhile, faced 44 balls and counted four fours and a six, but holed out to long off in the final over bowled by off-spinner Marlon Samuels.

The defeat for West Indies means they failed to win a single international on tour after losing both the three-Test and three-match one-day international series by 0-2 margins.

Winning the toss and batting, West Indies suffered a massive blow early on when big-hitting opener Chris Gayle top-edged a pull at Finn and was taken at fine leg by Jonny Bairstow in the third over for two with the score on 10.

His dismissal triggered a slide that left the Windies struggling on 30 for three in the seventh over.

Lendl Simmons, batting at number three, was brilliantly held by Bairstow running in from deep square leg off captain Stuart Broad's medium pace for six in the sixth over, before Marlon Samuels edged behind for four off off-spinner Graeme Swann in the next over.

It was left to Smith to accelerate the scoring, dominating an uptempo 77-run fourth-wicket stand off 54 balls with Bravo.

The right-handed Smith smashed five fours and five sixes off 54 balls, playing audaciously on either side of the wicket against both pace and spin.

Bravo and Kieron Pollard, whose cameo, unbeaten 23 came from just 13 balls, then added a whirlwind 65 from 28 balls, to end the Windies innings on a high.

Hitting the ball fluently, Bravo counted a four and three sixes off 36 balls, while Pollard smashed a four and two typically thunderous sixes.

Some way off a challenging total at 109 for four at the end of the 16th over, the two Trinidadians raised a frenetic 63 off the last four overs to give their bowlers something meaningful to bowl at.

Man of the Match: Alex Hales.