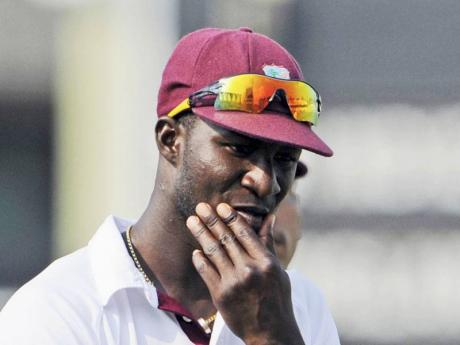 A dejected Darren Sammy has lamented West Indies' inconsistent displays after they slipped to another loss on Sunday to finish their tour of England empty handed.

The tourists went down by seven wickets in the one-off Twenty20 International at Trent Bridge to complete a wretched tour which saw them lose both the three-Test and three-match one-day international (ODI) series by 0-2 margins.

"We have just been dominated by the number-one team in the World in all formats of the game," the Windies captain said.

"I think looking at the squad we have for the ODI and T20I match, we had a really, really strong team on paper."

He added: "But you need to go out there and string together consistently good performances in the middle, and that's what England have done throughout and we haven't.

"We have got to be consistently good in all three departments: batting, bowling and fielding ... . We are doing some good stuff, but we are not doing it consistently for long enough."

Boasting their battery of Indian Premier League (IPL) stars, West Indies were tipped as favourites in the limited overs series, but failed to live up to expectations.

They lost the opening ODI by 114 runs, the second by eight wickets, before the third match at Leeds was rained out.

Yesterday, they failed to defend 172 for four after scintillating half-centuries from Dwayne Smith and Dwayne Bravo rallied the innings.

England T20 captain Chris Broad praised his side for the manner of their victory against what he described as a powerful West Indies line-up.

"I think on paper, all of us in this room would have looked at their line-up with (Chris) Gayle, Smith, (Marlon) Samuels, Bravo, and (Sunil) Narine, who were all successful in the IPL and probably looked at them as favourites," he pointed out.

"So to have won the game in the manner we did was hugely pleasing."

West Indies won just one game on the entire tour, a thumping 228-run win in a warm-up one-day game against a weakened Middlesex earlier this month.