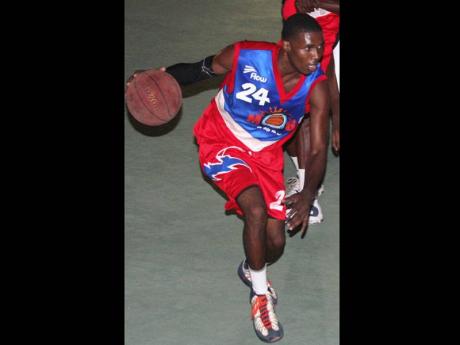 National representative Kemar McLeish came up big at clutch time for Runnin Rebels when he netted the winning shot to propel his team to an exciting 72-70 victory over Majesty Gardens Legends in their Flow/National Basketball League (NBL) game on Saturday night at the National Stadium Courts.

McLeish, who was playing against his old team for the first time since he made the switch to Rebels at the start of the season, silenced the Legends supporters when he rose above two defenders to score the game's winning shot with less than 25 seconds remaining.

By virtue of their victory, the Pete Matthews-coached Rebels, who ended the round with 10 wins and three losses, have secured their place in the Southern Conference finals against former champions Urban Knights.

"It was fitting for me to score the winning shot because of all the abuse that I had to endure from their supporters," said McLeish.

"I am also feeling good about my team's performance because we had to work really hard to win the game," he added.

Looking ahead to the final against the Knights, Matthews said: "We have to go back and train hard for the finals because Urban Knights is a good team and they beat us in the preliminaries.

"I think that they have the advantage over us, and so we will have to try to take away that advantage by beating them in the final," he said.

The Legends' captain, Baldon Todd, squandered a glorious opportunity to send the match into overtime in the final 10 seconds of the game. Todd had a clear opening to the basket, but instead of going for the shot, the lanky player decided to pass up the shot to his teammate, Ataina McLennon, who failed to hold on to the ball.

McLeish, who led the Legends to back-to-back NBL finals in 2010-11, led the way for the Rebels with a team-high 20 points and seven rebounds. He received good support from Jermaine Remekie, who added nine points and pulled down 18 rebounds.

Todd top-scored for the Legends with a game-high 32 points and 17 rebounds. He received support from Havando Dunn, 15 points, and Jermaine Brown, 14 points.

The Legends, who are seeking their first hold on the league trophy, finished their first-round fixture with eight wins and four defeats.

The first half of the contest was evenly contested as both sides battled to an exciting 41-41 scoreline at half-time. However, the Legends jumped out to a 47-41 lead at the start of the third stanza, courtesy of back-to-back three pointers from Todd and Brown.

Rebels fought their way back into the match as they went on a 15-8 run to end the quarter with a 56-55 lead. McLeish had an excellent third quarter for the Rebels as he netted 10 points and dished out four assists.

Ludlow Barker, coach of the Legends, said: "It was a tough loss for us, because we made a huge mistake towards the end of the match and that cost us the match."