No one will stop Foster-Hylton 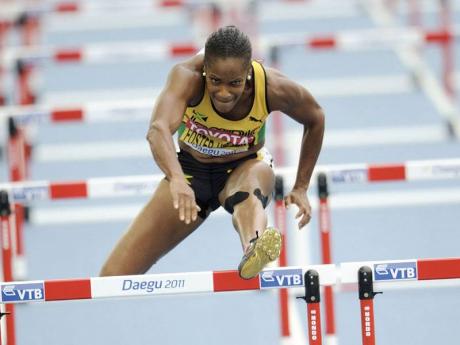 RANKED number three on the IAAF Top List with a time of 12.51 done in early May on local soil, veteran campaigner Brigitte Foster-Hylton is well set to capture another national title in the women's 100m hurdles at this weekend's Jamaica Athletics Administrative Association (JAAA)/Supreme Ventures Limited (SVL) National Senior Championships as athletes seek places on Jamaica's team to the London Olympic Games.

One of the most successful events for Jamaica's females on the world stage, little has been done over the past few years in the 100m hurdles for the nation, and Foster-Hylton's 2009 World Championships gold medal is the only bright spark amid average performances by the island's top female sprint hurdlers.

Despite failing to maintain the form she showed at the JN Jamaica Invitational in May, where she recorded a 12.51 season best, the Stephen Francis-coached Foster-Hylton should win at a canter this weekend and book her ticket to London.

It will be very interesting to see who will occupy the next two places on the team to London, and this could be the most exciting thing about the event, as none of the young athletes have stepped up to the plate and indicated that they are ready to carry the mantle laid down by Foster-Hylton, Lacena Golding-Clarke, and Delloreen Ennis-London, who all have represented the country with glory over the years in the event.

Defending national champion Indira Spence, who took the opportunity to win the event last year in the absence of Foster-Hylton, will be hoping to defend her title successfully, but she will have to show a big improvement if this is to happen as her season best, 12.95, done in Clermont, Florida, in early June, will not be good enough.

Former Convent of Mercy, Alpha, top hurdler Shermaine Williams, who, several years ago, won a silver at the World Junior Championships in the event, will be hoping to make a big statement after a season best of 12.98 seconds, done at the Cayman Invitational, where she finished third.

This could be the final appearance at the JAAA/SVL National Senior Championships for another veteran, Vonette Dixon, who, after representing her country for many years, will want to do so once again. Dixon will be banking on her experience, and despite starting behind with a 12.98 season best, she normally gives her best at this meet and it would not be too surprising if she finishes second to Foster-Hylton.

Also making a strong bid to finish among the top three is World Championships 400m hurdles representative, Nickeisha Wilson, who is finding the going tough in the one-lap event and will be hoping to pull off an upset over the shorter distance as she is also experienced in the 100m hurdles. She has done very well in the past for Louisiana State University and could pop up despite a season best 13.00.

In an event where Foster-Hylton is expected to dominate, it will be very interesting to see how the others finish, and the likes of Latoya Greaves, Kimberly Laing and former outstanding junior hurdler Natasha Ruddock could be waiting for this moment to make their presence felt.