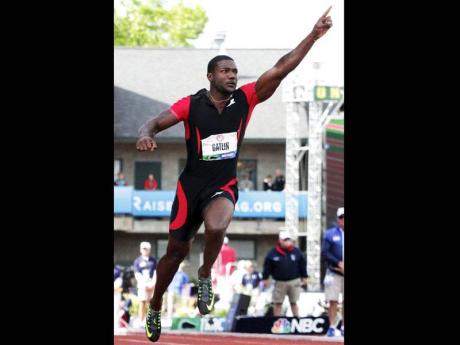 Justin Gatlin reacts after winning the men's 100 metres final at the US Olympic Track and Field Trials yesterday in Eugene, Oregon. AP

Justin Gatlin flew out to a fast start and held off Tyson Gay to win the 100 metres in the United States Olympic trials.

Ryan Bailey was a surprise third-place finisher as he edged 2009 US champion, Mike Rodgers, savvy veteran Doc Patton, and Walter Dix, the Olympic bronze medallist in Beijing. Dix pulled up in the semi-finals with a left hamstring injury and wasn't the same in the final.

Gay proved he was back after missing almost a year as he recovered from a hip injury that required surgery. Gay is the American record holder in the event.

Meanwhile, Sanya Richards-Ross equalled the meet record in the 400 metres, finishing in 49.28 seconds for a spot on the Olympic team.

Richards-Ross also plans to run in the 200 in the trials at Hayward for a shot at a double in the London Games.

Dee Dee Trotter finished in 50.02 and Francena McCorory was third in 50.43 for the other two spots on the team.

Natasha Hastings, who was on the 1,600m relay team that won gold in Beijing, finished seventh in 51.28.

Richards-Ross was the favourite going into the Beijing Olympics, but faded on the stretch and settled for the bronze.