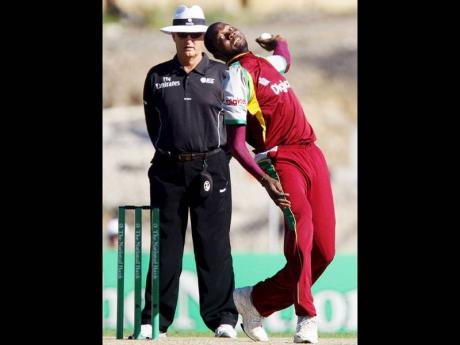 Temperamental left-arm spinner Sulieman Benn turned in a brilliant man-of-the-match performance to lift West Indies 'A' team to an unlikely come-from-behind win over India 'A' in the first Twenty20 on Saturday night.

The beanpole left-hander took three wickets in one over and then blasted 15 runs in the final over as the Windies won by three wickets with just two balls to spare at Queen's Park Oval.

Benn's three for 24 off four overs restricted India 'A' to 130 all out after the match was reduced to 18 overs due to rain.

He was supported by a brilliant three-over spell from seamer Jason Holder, who claimed three for 19.

The experienced 30-year-old Benn, recalled for this match following a spell of 15 months on the sidelines with disciplinary issues, blasted a match-winning 17 not out off just six balls to carry the home side to 131 for seven off 17.4 overs.

The West Indies entered the last over needing 15 to win with Benn on strike to Bhuveshwar Kumar, who had earlier ripped the heart out of the batting with three wickets for 25 runs.

Benn used the long handle and targeted the leg-side boundaries, smashing the first ball over square leg for six and repeated the stroke for an even bigger six off the second ball.

This reduced the equation to three runs off four balls and he stroked the next ball down the ground, with non-striker Garey Mathurin hustling back for a tight second run.

With one left to win off three balls, Benn calmly nudged the ball into the onside and completed the winning single.

Earlier in the innings, the West Indies got off to a strong start as opener Nkrumah Bonner led with 25 off 22 balls. He took a liking to pacer Shami Ahmed, who was carted for a four over long on and a six over long off in the third over.

Jonathan Carter kept the mid-innings charge going with a top score of 35 off 21 balls with three monstrous sixes.

He took a liking to Ahmed and lifted him for two leg-side sixes as the West Indies got 21 in the 14th over to come back into the match.

Carter added 33 in three overs with all-rounder Holder, who made 10.

Both Carter, caught at deep midwicket, and Holder, smartly stumped by Wriddiman Saha, fell in an eventful 15th over to off-spinner Rohit Sharma as the home side slipped to 109 for seven.

The first half of the match saw Benn and Holder restrict the visitors as the last seven wickets fell for 25 runs in the last four overs. Rohit Sharma showed his class with a number of breathtaking shots in 52 off 36 balls.

He fell caught at backward point to a loose shot - the first of three wickets for Benn in the 18th over. Benn was too much for Saha, bowled by a quicker ball as he tried to pull, while Jalaj Saxena was cleaned up by a quick, straight yorker.

Holder bowled a brilliant last over where he took two wickets and also had a direct hit for run-out as West Indies seized the initiative.

The two teams played the second and final T20 match at the same venue last night.

Man of the Match: Sulieman Benn.