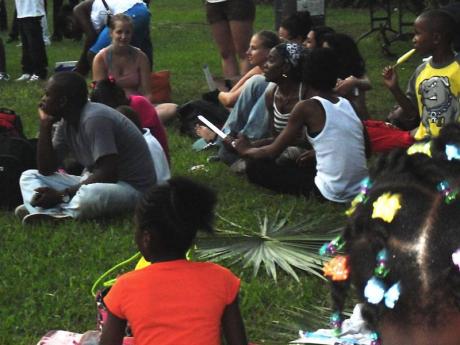 A section of the crowd at Rivfalls in Maggotty, St Elizabeth, watches the entertainment offerings at Ecofest last Saturday. - Photos by Nackeshia Tomlinson 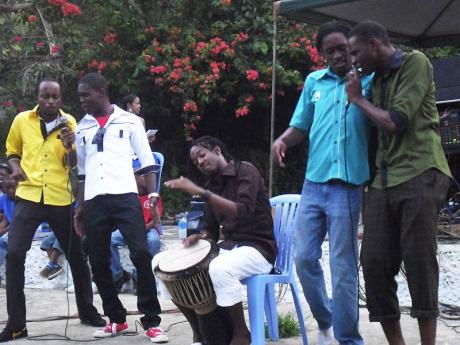 The entertainment package at Ecofest held at Rivfalls in Maggotty, St Elizabeth, over the weekend was good.

In keeping with the theme of the event, the diverse line-up delivered clean family fun to patrons.

Generally, the crowd response was, while not overwhelming, not without appreciation as patrons seemed content to sit on the grass and be entertained.

The package started at about 2 p.m. on Saturday when Maggotty High School produced a skit after which there was a pause until the main segment at six.

That main segment began with Apostle, who laid a spiritual foundation with a four-song set including Passion and Purity, Move Mountains, Cover Me Jesus and the mento-infused I Feel Like Carrying On.

Apostle was energetic, offering encouragement to the audience in-between the singing of his songs.

Next on stage was Rising Star Alumni Dominic Young, who showed much improvement since competing on the talent show.

Covering Usher's Take It Nice And Slow and Jah Cure's Reflections, Young kept the audience alert. Its appreciation was evident enough, especially by a few teenagers who sporadically screamed throughout the set. Of special interest to the group was Young's usher number, complete with a dance that matched the lyrics.

Dub poet group Colas was next and added to the variety in the entertainment offering, their set done to sounds from a 'Gimbe' drum.

The group showed much creativity and excelled at the art of storytelling with Mi Nah Bade, a number which made a case against the practicality of showering. The group performed in unison and played off each other, delivering a comprehensive set which offered comedy.

The performance baton was then passed on to Kingston-based Alexandria Love, who told the audience in her introduction that the religion of everyone should be love.

Love, who has a contemporary reggae sound, performed a set further enhanced by an impromptu Michael Jackson-inspired dance performance by a young patron, much to the delight of the audience.

Reggae artiste Nature was a standout. He tried to rouse the audience and told them that even though the venue was not full they should still enjoy themselves.

His vocals were noticeably melodious and consistent, his voice had a covert potency and although he also failed to get a traditional 'stage-show reception', his set seemed effortlessly done and the crowd seemed satisfied.

He was a convincing performer and did songs such as World Peace, Saving Time, Hold On for Love and Mamma You Save Me.

Veteran artiste Lymie Murray ended the musical segment by performing a mixture of old and new tunes, both covers and originals. This included Cruising by Smokey Robinson and Jeffery Osborne's On The Wings of Love, along with his originals, Hungry Belly Pickney and Rolling Thunder.

During his set, Murray tried to connect with the crowd. At one point he went from the stage into the crowd, much to the confusion of a startled audience member. His overall performance was engaging, in most instances. he had good clarity and even showed vocal variation by incorporating some falsetto into his singing.

The audience again seemed satisfied and did not object when an encore from Murray was requested.

The much-anticipated, newly released Kevin Macdonald's Marley, a documentary about Bob Marley, brought the event and the entertainment offering to a close.