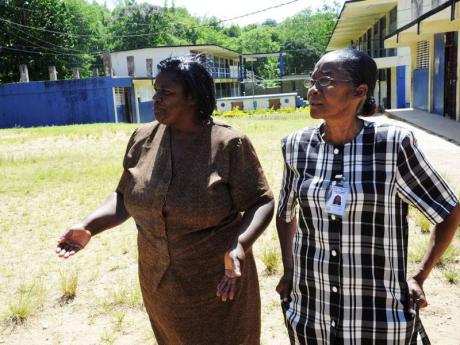 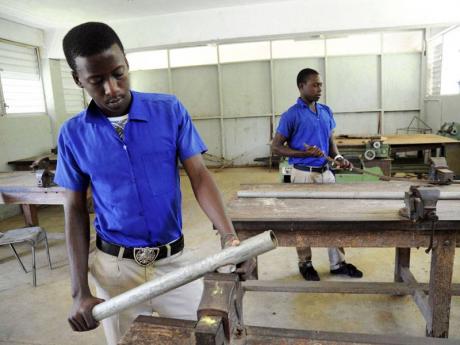 Dwayne Williams (left) and Donovan Gray at work in the metal workshop that is badly in need of equipment at Glengoffe High School. photos by Norman Grindley/Chief Photographer
1
2


A population overload, coupled with other severe challenges, has forced the Education Ministry to accede to Glengoffe High School's request to not send them any students from the Grade Six Achievement Test (GSAT) this year.

Come September, the deep rural St Catherine-based school will operate from grades eight to 11 and, for the next four years, will be functioning one grade less.

In addition, they will be instituting an extended-day timetable, which means school will begin at 8 a.m. for one set of students and 10 a.m. for another.

"The timetable would have to be constructed so that while some are at lunch, some would be using the classrooms. We have to stagger it to fit everybody. It will be difficult and very pressuring on the teachers because they will have no downtime," vice-principal Janet McDonald told The Gleaner.

"We know this is an unusual arrangement, but we have some very serious challenges and that is the only thing we could do right now to help alleviate some of the problems.

"Our major challenge is spacing. We were built to accommodate 300 students, but we now have 937. In fact, some years we have 1,200. Everyone has to be crammed into small spaces."

The shift system that was instituted to help with the overpopulation will also be abandoned come September.

"Given the terrain of the area and difficulty getting here, it was problematic starting at 7 a.m. and in the afternoon it gets dark very early. So in order to be off the shift system, it was either less students or more classrooms. As it is, the ministry is not in a position to give us more rooms, so we are left with cutting back on the number of students we have," said principal Heather Grizzle.

The decision has not gone down well with the community.

"They are begging us to take the children," the principal said.

"Getting in and out of the area is difficult. In fact, the only mode of transportation is the robot taxis. It is also going to cost the parents - who already don't have it - dearly to get to the other schools, plus the children will have to be up from 3 a.m. to get down to the main to catch the 5 a.m. bus."

The alma mater of Commissioner of Police Owen Ellington, Glengoffe had been a feeder school for primary schools in that area, but despite its limitations, the ministry started placing more than double the number of students the school could accommodate from other areas.

"We are not only getting students from in and around Glengoffe, but also Stony Hill, Linstead, Mannings Hill, Junction, Portmore, Spanish Town, within St Mary, all over," said McDonald.

"Two years ago, for example, the ministry sent us 245 students for grade seven and remember that the entire school was built to accommodate 300. Plus each year we also get another 60 students from the Grade Nine Achievement Test."

The increase in student population put a heavy strain on the school's resources. Compounding that, McDonald said, they were getting students with very low grade averages, ranging from zero to 40 per cent. This resulted in poor academic performance.

It got so bad, last year, former Education Minister Andrew Holness listed Glengoffe, along with Marcus Garvey Technical High, Balaclava High and Holy Trinity High for intervention, citing failing academic performances, complaints of poor management and deterioration in discipline. But they are yet to see any meaningful intervention.

McDonald noted that despite the fact that the 43-year-old school was upgraded to a high school in 2000, no upgrade was done to the infrastructure.

"The only thing that changed, was our name," said the educator who has been at the institution for 29 years.

"To a large extent, the performance has been as a result of the low grade level of the students placed here."

She added, "For instance, when we look at the qualification of our teachers, about 70 per cent have first degrees and others are pursuing theirs, so we have the quality staff to deliver. But with the level students that we get, we spend more time getting them to function at a level where they can fit into society other than to get them to pass CSEC (Caribbean Secondary Education Certificate)."

To return to functioning as a normal school and accommodate the overflow, Glengoffe needs at least 20 additional rooms - 14 dedicated classrooms and the rest utilised for offices, special subject rooms, science lab and guidance counsel rooms. They are also badly in need of furniture and upgraded equipment for subject areas such as industrial arts. Because of their limitations, they are not able to offer physics and chemistry to students.

"Based on the level of students we get, we also have a need for more reading specialists and a better equipped reading room with more computers and the necessary software. The students come in at very low reading levels and so we have to have that kind of intervention," said McDonald.

"We also really need a playfield. Even though our students go to Eastern Champs and do well, they train on the road and up the staircase and along the corridors."

Situated on a vast, lushly vegetated compound, the school has more than adequate space to build the rooms needed, but the financial resources are just not available.

"The basic structure is here, there is the potential for expansion, we just need the funding," stated Grizzle, an educator at the school for 40 years.