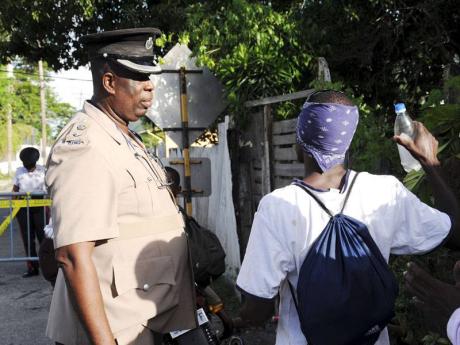 Senior Superintendent of Police Derrick Knight converses with a young man from the August Town community in St Andrew yesterday at a checkpoint set up by the police. The police were searching for men involved in the shooting of four residents on Saturday.


THE FEAR among residents of August Town, in St Andrew, was still evident yesterday as they recounted the frightening moments before two of their own were chased, cornered in a house and shot repeatedly by a gang of "about 30" gunmen on Saturday.

Their concerns heightened after the St Andrew Central Police confirmed something most of them already knew — that one of the men killed, Rohan Simpson, was the brother of a man who is a witness in a 2006 case.

"Him (Simpson) was not no witness. But dem waan get rid a him because him have one bredda who dem say a informer," said one woman, who identified herself as his girlfriend.

"So dem probably a think say when him (the witness) hear this him ago get 'fraid an nobodda point out di man dem," she surmised.

Added the woman: "Right now me feel very insecure. Not even the police can save we."

Head of the St Andrew Central Police Senior Superintendent Derrick Knight confirmed that investigators have established a connection between the double homicide and the 2006 case.

Knight would not give details about the case, but sources say it involved five men who were accused of killing another man.

He said persons involved in the case have already been convicted while others who were jointly charged are scheduled to face an ID parade this week.

"So they have been sending messages to persons in the community for them to have the witness (the victim's brother) not attend the ID parade and this is one of the reasons why they came and did the shooting," Knight told reporters outside the August Town Police Station.

One of those calls, Simpson's girlfriend said, came last Thursday when "one a di man dem whey deh a jail call mi babyfather and tell him fi tell him bredda don't go a no ID parade."

Recounting the incident, one woman said residents were going about their normal business when suddenly a group of about 30 men armed with guns marched up to a premises located at the intersection of August Town and Reserve roads.

She said everyone, including Simpson and another man the police have identified as Moses Francis, started running.

The woman said Simpson and Francis ran inside his home with some of the gunmen giving chase.

"Me no know wha happen afta dat cause me run go hide, but a bare gunshot after dat," she said.

Shocked at the number of men alleged to have carried out the attack, SSP Knight said it was clear that the police were fighting "guerilla warfare".

"(This is) terrorism at the highest level when 20 men commit an assault on a community in that number," he said.

SSP Knight said four men who were listed as persons of interest on the weekend turned themselves in to the police yesterday.

He said investigations were continuing and assured the residents that the security forces would maintain a strong presence in the community.

This was of little comfort to some residents, who said the killings were like a never-ending cycle.