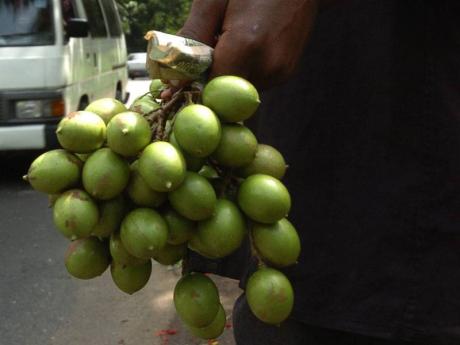 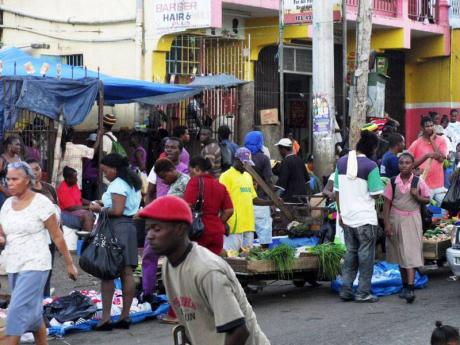 Vendors ply their wares on Fletcher's Avenue outside the Linstead Market. - FILE
1
2

SHE LOOKED down at the phone in her hand, mumbled something under her breath, then put it forcibly into the bag she was carrying over her shoulder. She did not seem happy.

We were standing across the road from each other near the Linstead Market in St Catherine. It was close to midday and the early-morning crowd had just about disappeared, creating a rare lull in activity.

I was in the company of a fellow called Willie, who was making a valiant attempt to convince me to purchase a bunch of guineps from him. I had long ago declined - his stock appeared rather wilted and bruised - yet he persisted with a sales pitch that, were I so bold, I would have told him was far from encouraging.

I looked across the road at the woman again. She was now tapping her feet impatiently and kept glancing at her watch.

"So yuh nah buy none, boss?" he asked. I reminded him that I did not want any. He looked around for his next victim and, spotting the woman across the road, ran over to her with his weather-beaten bunches of guineps in hand.

Given the woman's demeanour up to that point, I was surprised to see her snap one of the guineps from the bunch. She cracked it open with her fingers, then popped it into her mouth. Willie seemed pleased with the woman's apparent interest.

There was evidence though, that the deal was going sour.

The woman's mouth curled, she squinted and appeared overcome with pain before spitting the guinep to the ground with malice.

Willie hurriedly walked back over to where I was standing. The woman stormed off in the other direction.

I was chuckling when Willie arrived. "It nuh funny, man!" he insisted. "Suppose people hear har?"

A boy in a khaki shirt and trousers came up to Willie. He examined the guineps. "Dem sweet?" he asked. Willie nodded. The boy took a small bunch from the lot and handed some money to Willie.

The seller appeared nervous as the boy popped the first guinep into his mouth.

"Tuh!" In no time the guinep was on the ground.

Willie was not going to hang around answering questions. He retrieved from his shirt pocket the money the boy had paid him and threw it back at the youngster before walking away. The boy gathered the money, which had fallen to the ground next to the discarded guinep, and happily walked away. I'm sure I saw him pop another of the sour guineps into his mouth.

Activity in the town was picking up. Taxis and pedestrians were moving about. I spotted an elderly man wearing a cap and spectacles, leaning on a utility pole. He was reading a folded newspaper. I walked up to him and said hello. He returned the greeting and told me to call him Webster. I asked Webster why he chose to read his paper in the centre of a busy town. He laughed.

I asked him if he enjoyed being part of the goings-on in Linstead.

"Yes man. When you old, it good to come and mix wid di young people sometime," he said. "It keep yuh young and fresh. Linstead keep yuh fresh like the fruits into the market."