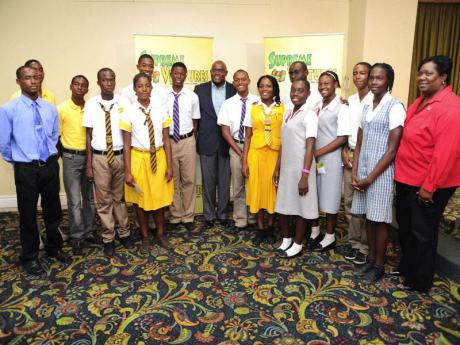 A fiery press conference at the Knutsford Court Hotel in Kingston yesterday laid the lines, as the Jamaica Athletics Administrative Association (JAAA) and the media fraternity became engulfed in a firestorm over its decision to effect unprecedented accreditation fees and photo demands for journalists at this week's JAAA/Supreme Ventures Limited (SVL) National Senior Championships.

Another sticking point is the JAAA's decision to grant accreditation to one reporter per media house.

Already suffering the ire of the local coaching and athlete support fraternity for similar $1,000 fees for access to the National Stadium for the June 28-July 1 event, the JAAA - organisers of the meet - have decided to charge media houses to provide coverage in what they describe as an attempt to recoup costs and streamline the accreditation process to address space issues.

The JAAA is also demanding that accredited photographers hand over all images taken at the four-day meet, in another move that left media professionals fuming, but one they hope will increase their own photographic archive and limit promotional costs for meets like this weekend's trials.

These moves have never been attempted anywhere in the world, and journalists who were present at the press conference were obviously furious with the organisation's latest decisions and openly questioned the JAAA's motives, saying it transgresssed media privileges.

International media organisations have staunchly rejected the idea of charging media houses or journalists to cover events, with the most recent dispute being between the International Olympic Committee and the International Sports Press Association over Internet fees at next month's Olympic Games in London.

The Press Association of Jamaica (PAJ) - with which Gordon says they have a verbal agreement to eliminate the cost for accreditation as relates to its quota restriction (one reporter per media house) - has intervened in the matter, and a meeting is scheduled for this Thursday with the JAAA.

"The JAAA must seek to maximise its revenue," were the sentiments of Dennis Gordon, communications director of the organising committee. "It is not fair for a media house to charge the JAAA to promote the event and then expect the JAAA to pay for an athlete's image if we need it for promotion.

"All photographers will have to sign a legal document that states that at the end of the meet, within 48 hours, they are expected to give us a CD with all the images taken and that they ought not to be used and reproduced for commercial purposes," Gordon asserted.

Gordon pointed to several "challenges" being faced by the organisers, including the lack of space at the National Stadium's Media Tribune, increasing costs, and the practice of some media workers to abuse the accreditation system over the years as the main reasons behind the new approach.

"We are moving to partner with the media to get the issues right, and part of the problem is that we have no space, abuse of the system and the cost to the JAAA that we need to recover," Gordon continued.

"We are saying to the media houses, there needs to be a partnership that is reciprocal, where you give us something and we give you something. It cannot be where the JAAA provides the facility and the support mechanism and at the end of the day we require one image to promote the meet and we are being told that we have to pay for it. We are saying that it is unfair and there is a clear imbalance in how we operate," said Gordon.

The JAAA pays between $200,000 and $300,000 for accreditation for media and support staff for the meet, which is being sponsored to the tune of $10 million by Supreme Ventures Limited (SVL). This is the company's ninth year of involvement with the meet.