'This is our Olympic moment' 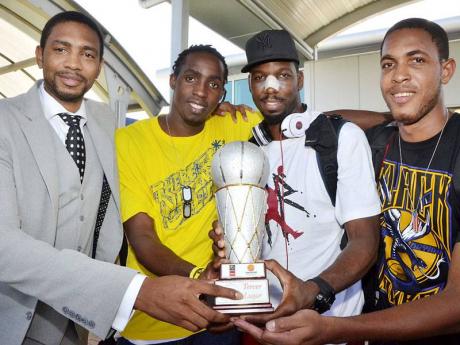 Williams told The Gleaner upon the team's arrival at the Norman Manley International Airport yesterday from the Centrobasket Men Championships, which was held in Puerto Rico, that he was proud of the team's achievement.

"We are just really grateful and we are humbled at this success," said Williams. "We are really grateful that God gave us these talents whether athletic talent, coaching and administrative talents that we have got here.

"We have spent so many years trying (to qualify), a huge gorilla was on our backs and this is just a big relief for us," Williams said.

Continuing, Williams said: "I feel like this is our Olympic moment and these small moments really add up and so us going up against the likes of Argentina and Brazil next year, that's huge for us."

Jamaica secured the first medal at the championships when they defeated Panama 78-54 to capture bronze on Sunday night in Puerto Rico.

Weyinmi Rose led the way for the Sam Vincent-coached Jamaicans with a game-high 21 points. He received solid support from Jerome Jordan, who added 17 points and 11 rebounds and Samardo Samuel, 13 points.

Williams also praised the efforts of the team, which upon reaching the semi-final attained the country's best ever position at the championships.

"Samardo Samuels played his heart out and he played exceptionally well for us. Jerome Jordan really played well and everybody really chipped in and so it was really a team effort and I am really sincerely proud of these players," Williams added.

"This is not the full potential of our team because we have only been together for about a week before the tournament starts and to qualify and getting a medal, I could not have asked for more," the JaBA president stated.

Ffriend, who has been part of the national set-up since 1998, was overwhelmed.

"Tears came to my eyes after we won the bronze medal," said the 34-year-old Ffreind, who plies his trade for Fuenlabrada in Spain's top league.

"I am very happy and I was overcome with joy because a lot of people have made a lot of sacrifice for us to reach this far and so it is a very big achievement for Jamaica's basketball."

He added: "It is wonderful feeling being a senior player and the captain of the team and being a part of the programme for such a long time and for us to reach the next round of the competition shows you that we have a lot going for us."