Venus ousted in first round 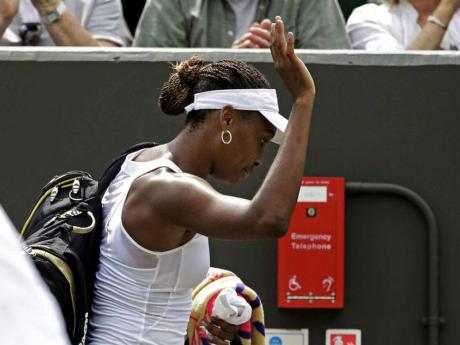 Venus Williams of the United States (right) gestures as she leaves after she was defeated by Elena Vesnina of Russia following a first-round women's singles match at the All England Lawn Tennis Championships at Wimbledon, England, yesterday. - AP

Racket bag slung over her shoulder, resignation written across her face, Venus Williams weaved through fans milling about on the sidewalks that players must traverse to get from Court Two to the Wimbledon locker rooms.

The 32-year-old Williams had just absorbed a lopsided first-round loss at the Grand Slam tournament she once ruled, a poor performance that raised questions about how much longer she will keep playing tennis while dealing with an energy-sapping illness.

She trudged by as her hitting partner, David Witt, was saying: "It's tough to watch sometimes. I think everybody sees it. I don't know what else to say.''

Looking lethargic and rarely showing off the power-based game that carried her to five Wimbledon titles and seven majors overall, Williams departed meekly yesterday with a 6-1, 6-3 defeat against 79th-ranked Elena Vesnina of Russia. Only once before - as a teenager making her Wimbledon debut in 1997 - had Williams exited so early at the All England Club.

She hadn't lost in the first round at any Grand Slam tournament in six and a half years. Still, Williams said she'll be at the London Olympics next month and is "planning'' to be back at Wimbledon next year.

"I feel like I'm a great player,'' Williams said, sounding a tad like someone trying to convince herself.

She repeated that affirmation as she continued: "I am a great player. Unfortunately, I had to deal with circumstances that people don't normally have to deal with in this sport. But I can't be discouraged by that. ... There's no way I'm just going to sit down and give up just because I have a hard time the first five or six freakin' tournaments back.''

Later, as part of a slightly testy and awkward exchange with reporters, Williams said: "I'm tough, let me tell you. Tough as nails.''

Her loss, in her first match since a second-round ouster at the French Open, was part of an odd Day One, even if the true tournament favourites in action won easily: Novak Djokovic, Roger Federer, Maria Sharapova. Among those sent home were sixth-seeded Tomas Berdych, the 2010 runner-up at Wimbledon; 11th-seeded John Isner; No. 16 Flavia Pennetta; and No. 18 Jelena Jankovic, who was rather easily beaten 6-2, 6-4 by Kim Clijsters, a four-time major champion who has been beset by injuries in her last season on tour and, like Williams, is unseeded.

Truth be told, the biggest surprise might very well have been the way Isner - the highest-ranked American man - blew a match point, wasted a two-sets-to-one lead, dropped a tiebreaker on grass and bid a 6-4, 6-7 (7), 3-6, 7-6 (7), 7-5 farewell to Wimbledon in the first round against 73rd-ranked Alejandro Falla of Colombia.

"A lot of players mature later than others. Some mature at 15; some mature at 29. I hope it's somewhere in between; 23 is OK,'' Gulbis said. "If I hit the ball well, I hit stronger than everybody else. It is like this, you know. Maybe only a couple guys hit the ball as strong as I do.''

The older Williams has played only 18 matches in 2012, going 12-6 and looked rather ordinary against Vesnina, who is more accomplished in doubles and never made it past the fourth round at a major tournament in singles.

"Of course, I was scared. Not scared, but I was, like, aware of her serve. But I think she didn't serve that well today,'' said Vesnina, who recalled watching on TV when Williams beat Lindsay Davenport in the 2005 Wimbledon final.

"Maybe, for her, it was not one of her best days,'' Vesnina said about yesterday. "But for me, it was one of the best days.''

At her news conference, Williams was asked what will drive her, given the way she's struggling.