European plan tries to convince Germany to do more 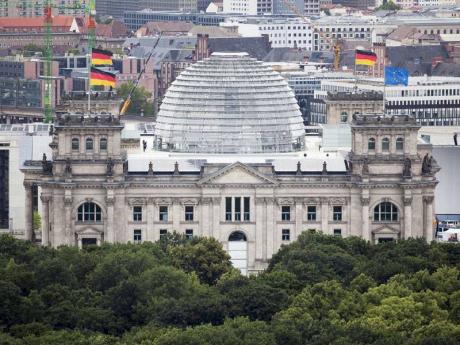 Top European officials have called on countries that use the euro to surrender more control over their national budgets, a move apparently aimed at easing Germany's fears of sharing debt burdens with struggling governments like Spain or Italy.

The plan is meant to be a grand vision to save the euro currency from financial disaster and to set up negotiations between leaders at a key European Union summit on Thursday.

Germany, Europe's biggest and strongest economy, is increasingly isolated in its refusal to quickly adopt measures such as jointly issued eurobonds, which would see it take on some of the debt risk of financially weak countries.

Some experts say such debt-sharing is what Europe needs to end its crisis as it would help defuse the prospect of unaffordable bailouts for Spain or Italy.

But Germany is worried that such debt-sharing would tempt financially weak countries to spend irresponsibly once again and not reform their economies. Reassuring Berlin that governments would face tough oversight of their budgets would be key to easing Germany's resistance to debt-sharing.

"What is at stake is...the overall confidence in the euro area, and indeed in our commitment to the European project," European Commission President Jose Manuel Barroso told reporters in Brussels. "For a genuine economic and monetary union to be established, I think we need a banking union, a fiscal union, and further steps toward a political union."

The plan was was drawn up by the "gang of four" top European officials: Barroso along with Council President Herman Van Rompuy, Eurogroup President Jean-Claude Juncker and European Central Bank President Mario Draghi.

It is doubtful whether Eurozone governments will be willing to cede control over their budgets and whether citizens of European countries would accept the idea even if their leaders sign off on the idea.

The plan is to be debated by leaders from around Europe at a summit in Brussels Thursday and Friday that takes place against a backdrop of financial strains that are threatening to shatter the single currency.

On Monday, Spain requested financial help to recapitalise its banking industry, and yields on Spanish and Italian government bonds are rising toward levels that forced the governments of Greece, Portugal and Ireland to seek bailouts. But Spain and Italy are widely considered "too big to bail" —even for Germany.

The plan proposes a "medium term" move towards eurobonds, as well as creating a banking union with a single authority. This authority, probably the ECB, would have the power to shut insolvent banks and insure deposits, with help from Europe's permanent bailout fund.

Though the plan is similar to those put forward by the International Monetary Fund and French President Francois Hollande, it was not quickly embraced by Germany.

Analysts were sceptical that the plan would help reach a concrete deal that might ease concerns in the eurozone.

"Such proposals are just bureaucratic fine-tuning, rather than game-changing policies that will result in debt mutualisation and a banking Union," said analyst Neil MacKinnon of VTB Capital.

"As a result, the EU Summit will likely produce re-hashed plans for closer fiscal integration and a banking union but without any substantive detail of how it will actually be put into practice."

Though many European citizens will be opposed to the idea of surrendering control over their budget, their governments all agreed to abide by a three per cent fiscal deficit limit when they joined the single currency.

After multiple violations of the limit - by Germany and France in the early 2000s, and then a host of countries in the wake of the 2008 financial crisis - the three per cent limit was reaffirmed in a new pact signed in January but not yet ratified. That pact also obliges eurozone countries to submit preliminary budgets to Brussels each year.

The latest plan published Tuesday was short on detail, but appeared to propose an even closer oversight of national budgets: "upper limits on the annual budget balance and on government debt levels of individual member states could be agreed in common," it said. Then, a "euro-area level" authority could "require changes" to budgets of countries that stray.

At the end of the report, Van Rompuy volunteered to develop a "specific and time-bound roadmap for the achievement of the genuine economic and monetary union" by December.