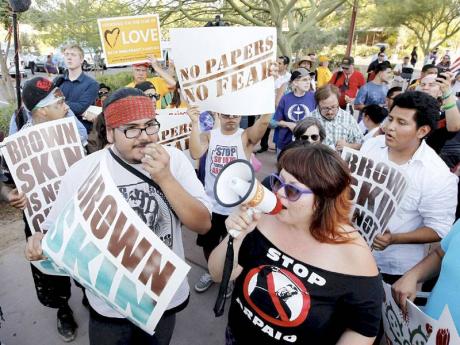 Dozens of immigration-rights protesters gather and chant after the United States Supreme Court decision regarding Arizona's controversial immigration law, SB 1070, at the local US Immigration and Customs Enforcement offices Monday, in Phoenix. The Supreme Court struck down key provisions of Arizona's crackdown on immigrants Monday, but said a much-debated portion on checking suspects' status could go forward. AP

A leading human-rights group here has warned that the United States Supreme Court's decision to uphold part of Arizona's immigrant law puts Caribbean and other immigrant families in Arizona and other states at greater risk of abuse from local authorities.

Monday's ruling in the case Arizona vs United States overturned several sections of the Support Our Law Enforcement and Safe Neighbourhoods Act, commonly known as SB 1070, on the grounds that they are pre-empted by federal law.

But it left intact a section requiring police to attempt to verify a person's immigration status if they have 'reasonable suspicion' that the individual is in the country without authorisation.

"The court said it was too soon to know what harm there might be from this one provision, but the harm from a similar provision in Alabama is all too clear," she added.

Meng said the court's ruling on the law's 'reasonable suspicion' provision focuses on a narrow legal issue and does not foreclose other challenges to this provision.