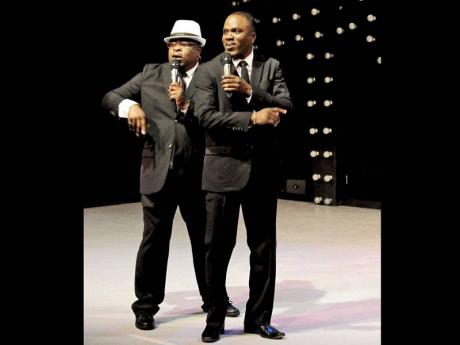 Ity (right) and Fancy Cat during a performance of their comedy show at TVJ's Lyndhurst Road studio.Winston Sill/Freelance Photographer 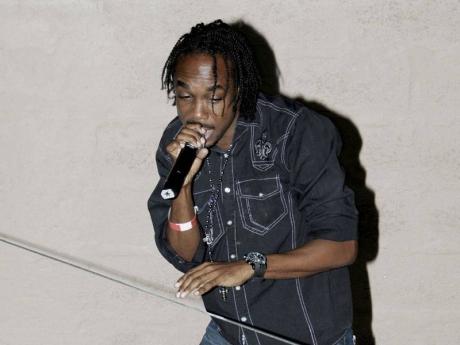 Jamaica's most popular comic duo, Ity and Fancy Cat, will break new ground as the first acts of the Pepsi Music Comedy Series get under way at Usain Bolt Tracks and Records tonight.

The show will be hosted by Leighton Smith and will launch the series that is intended to go islandwide in the coming months.

It also represents the introduction of a new concept by Pepsi Jamaica. Last year, Pepsi introduced the Pepsi Music concept in which they partnered with several music-based events like the Youth View Awards, Rebel Salute, Reggae Sumfest and Dream Weekend, but according to Carlo Redwood, head of marketing for Pepsi Jamaica, it is time to try something new.

"We have been using the Pepsi Music concept for about a year now, so we are trying to introduce a new concept," he said.

"We want to bring this new concept of having comedy along with music, bringing the two together in a party, kind of like Def Comedy Jam in the United States. Americans have their hip hop with the comedy; we have dancehall along with our comedy."

Redwood explains that the format will take the form of the host running the event and introducing the comedians. The comedy routines will be interspersed by the guest disc jockey - in the first two instances - DJ Cruise - who will play a wide variety of music from oldies to dancehall.

Ity and Fancy Cat were selected to be the first acts as they represent the best of comedy in Jamaica today, Redwood remarked.

"We were looking for cool, hip comedians who are able to creatively make fun of what is going on in Jamaica right now," he said.

And that is exactly what the comedic duo plan to bring, as for their opening act they intend to include material currently in the news, including the current furor over the Jamaica50 title song.

"We are going to be influenced by what is happening today," said Ian 'Ity' Ellis. He said he also intends to invite some of the talent that people have come to be associated with in his act, including Cassie 'Tan Deh Deh' Grant who is a crowd favourite.

Ellis lauded the entry of Pepsi into the world of comedy. "We are happy to be a part of anything that has the word comedy," he said. "We are especially happy to see a corporate brand putting their support behind the genre."

Ellis, who along with his partner Alton 'Fancy Cat' Hardware, hosts the extremely popular Ity and Fancy Cat Show on television currently in its fifth consecutive season, believes the Pepsi Music Comedy Series will help expose the large number of comedians in Jamaica who are greatly underexposed.

"There are so many comedians here in Jamaica, so this series will help develop the genre," he said.

Following tonight's show, another will follow at Tracks and Records that will feature Donald 'Iceman' Anderson and Christopher 'Johnny' Daley on July 25. In the coming months, other locations across the island will host the comedy series as Pepsi rolls it out across the island.

Redwood revealed that locations are being sought in Ocho Rios, Mandeville, Clarendon and Montego Bay, among others.

And as the series expands across the island, Redwood said Pepsi will be tapping into the talent available locally, but, ultimately, they are looking to eventually bring in a top international comedic act, as the event takes on a more international flavour.