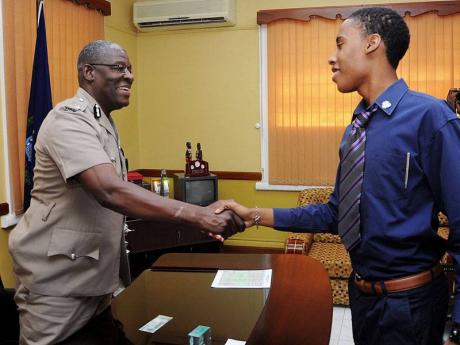 Commissioner of Police Owen Ellington warmly greets 16-year-old Daniel Santos, head boy at Donald Quarrie High School, as he begins his day of activities as Commissioner for the Day. 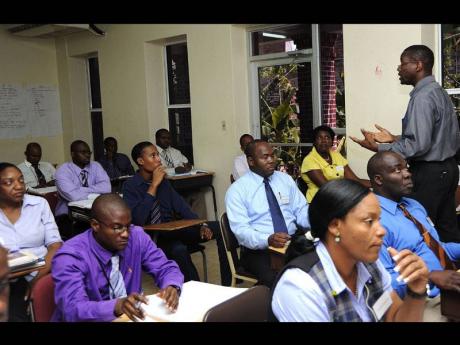 As part of his activities as Commissioner for the Day, Daniel Santos, head boy for Donald Quarrie High School, sits in a level one Criminal Investigative Branch two-week course being taught by Detective Corporal George William Gordon (standing) at the Central Police Station in Kingston. - photos by Ian Allen/Photographer 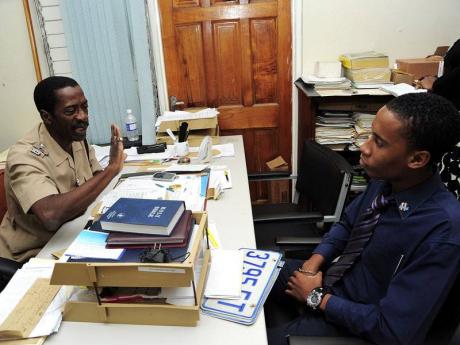 Commissioner of Police Owen Ellington warmly greets 16-year-old Daniel Santos, head boy at Donald Quarrie High School, as he begins his day of activities as Commissioner for the Day.
1
2
3

Sixteen-year-old Daniel Santos sat attentively in the cool air-conditioned St Andrew office of Commissioner of Police Owen Ellington, engrossed in the words of wisdom being imparted to him.

He was delighted to meet the man he had admired for so long, and when he got the opportunity yesterday to be Commissioner for the Day and learn the inner workings of the Jamaica Constabulary Force (JCF), he absorbed all he could.

The Donald Quarrie High School head boy had always had his heart set on joining the police force, moving up the ranks from detective to one day sitting in the chair of the commissioner.

At the end of a 20-minute talk on being an effective law enforcement officer, Ellington told him that he would be a welcome addition to the police force and promised to keep track of him over the next two years until he becomes eligible to join the team.

"See you in another two years," Ellington told him.

"It was a privilege to finally meet the commissioner," Daniel told The Gleaner as he exited his office.

"It has been my wish to meet him for some years now. I've always seen him on TV and seen that he was a very outspoken man. His job shows us that it is not only about going out there with the gun, but there are other things involved. We must ensure that we work with the police all the time for the country to build and grow, because they are out there to protect us."

Daniel spent the rest of the day visiting the various departments of the JCF, including the 119 call centre, Traffic Division, Criminal Investigative Branch and Organised Crime Investigation Division.

Humble yet quite confident, he fired several questions at the various department heads. Sharing that it was a very eye-opening day, he noted that he learnt that the JCF entailed an intricate network that offered endless opportunities for career advancement for a number of young persons.

At the end of the day the young man declared, "It was a great experience. I now have a better understanding of how things work, the challenges the police have to face and how they take on those challenges. The force really offers a variety of jobs. I know it will take a lot of work and commitment, but I am now ready more than ever to take on the task of fulfilling my dream to become a detective."

A resident of Parade Gardens in Kingston, the ambitious young man, who will be graduating this year, has always been an active member of his school, including president for the prefect body and a member of the Environment Club, Key Club and football team.