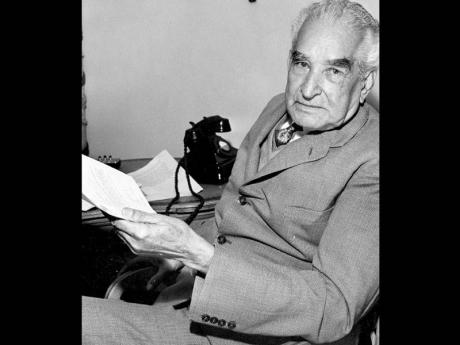 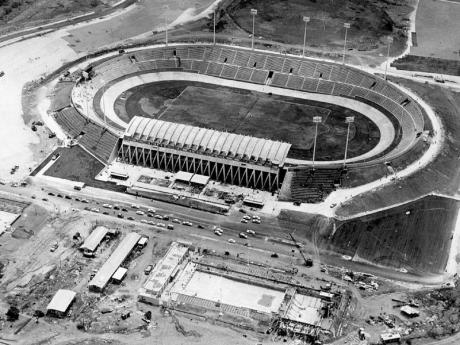 An aerial view of the National Stadium at Briggs Park. The bleachers have been completed, the ten floodlight poles have been erected, the cycle and running tracks are ready for use and work on the grandstand is moving rapidly. In the foreground (right) are the swimming and diving pools and, extreme left, the arena for games such as basketball and netball. - File
1
2

From earthquakes, hurricanes and fires to Olympic glory and Independence, 'The Gleaner' started chronicling Jamaica's roller-coaster history ride in 1834, and has had a front-row seat at every major event since.

Jamaican investors will be asked by the Government to participate in a local loan of £1m in the first effort by the present administration to mobilise local savings for investment in the country.

The offer will be made July 16 of a maximum amount of £1m to mature in seven years. The money will be used for such purposes as promoting industrial and agricultural development and financing Jamaica's financial institutions like the Development Finance Corporation.

Board wants school head to go

The board of governors of Ferncourt High School, Claremont, plans to recommend to the Ministry of Education that the appointment of the present headmaster, E.D.H. Weller, be not confirmed at the end of his probationary period in December. Weller assumed his post last January. The board's chairman, David H Brown, said yesterday there had been no official decision or announcement made to the ministry, although two top officers of the ministry attended the board meetings of May 17 and May 30 which dealt with inquiries into charges and counter-charges made by Weller and some of his staff.

Sir Alexander Bustamante, prime minister of Jamaica, held a busy round of talks at the State Department today with high-ranking officials in the fields of foreign assistance and Latin America affairs.

The prime minister began his discussions with Fowler Hamilton, administrator of the Agency for International Development, which has charge of all foreign-assistance programmes.

There was no immediate word whether they had discussed possible US aid to Jamaica when it attains Independence shortly, but observers thought it likely that the question of some form of future technical assistance was brought up.

Thieves have been busy at the National Stadium over the past days, removing the cable wires stored for use in construction of the stadium. A spokesman for the stadium contractors yesterday said additional watchmen have to be employed to prevent further losses.