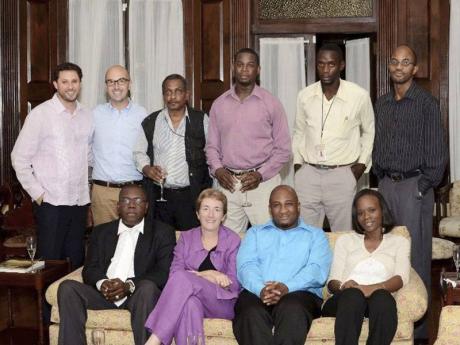 FIVE LOCAL journalists are currently in Brussels, Belgium, participating in a training course which has been organised by the Delegation of the European Union (EU) to Jamaica.

The journalists have been awarded full sponsorship for the course, which is aimed at exposing media practitioners to the structure and operations of the EU and its institutions.

The journalists, Kaneal Gayle (CVM TV), Cliff Hughes (Nationwide News Network), Daraine Luton (The Gleaner), Kimmo Matthews (The Jamaica Observer) and Damion Mitchell (The Gleaner Power 106) are benefiting from the one-week training course managed by the European Journalism Centre, which started on June 24 and will end on June 30.

The journalists left the island last week. The training features attendance at the EU parliament, seminars on the key institutions and the operations of the council as well as provide interview opportunities with principal EU figures.

Speaking at a dinner in honour of the selected participants, head of Delegation for the European Union in Jamaica, Ambassador Paola Amadei, said this is a propitious time for a journalist to be in Europe: "We received applications from some of the brightest and most engaging minds in the media landscape. However, regrettably we could only offer five spaces.

Aim of the training

The aim is that the training will not only foster greater understanding of EU operations in Jamaica and the wider Caribbean, but also understanding of what, why and how we do what we do across the globe."

She expressed hope that the programme would become an annual one. The journalist training is a continuation of several initiatives undertaken by the delegation in celebration of Europe Day (May 9) and in recognition of the institution's partnership with Jamaica as the country marks its 50th anniversary of Independence. The other events included the My Jamaica at 50 schools' photo competition, a GOLA Exhibition Day and the public showing of the human rights film The Choir.

CAPTION: Journalists pose for a photo at a dinner hosted by Head of the EU Delegation to Jamaica Ambassador Paola Amadei. Seated from left: Cliff Hughes, Nationwide News Network; Ambassador Paola Amadei; Kaneal Gayle, CVM TV, and Jodi Brown-Lindo of the EU delegation. Standing from left are: Jorge Garzon, spouse of Amadei; Alberto Menghini of the EU Delegation, Michael Gordon; Daraine Luton of The Gleaner; Kimmo Matthews of the Jamaica Observer, and Damion Mitchell of The Gleaner Power 106 News Centre.