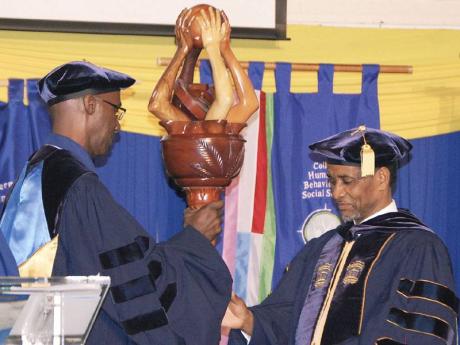 Pastor Everett Brown (left), chairman of Northern Caribbean University, hands Dr Trevor Gardner the university's mace after he was sworn in as the 23rd president of the institution. - PHOTO BY DAVE LINDO

DR TREVOR G. Gardner was on Monday installed as the 23rd president of the Northern Caribbean University (NCU) with a mission of taking the institution to even greater heights in the future.

Dr Gardner took over the baton from Dr Herbert Thompson, who served as the president of the institution for more than 20 years.

The installation ceremony was a pompous affair. People from across Jamaica and overseas journeyed to Mandeville, Manchester, to witness this special event. Politicians, educators, local and overseas members of the Seventh-day Adventist Church conferences, along with the NCU family, turned out to support the newly installed president.

"Dr Gardner is the perfect choice to lead the institution at this time as it faces the challenges and opportunities of the 21st century," he said.

Dr Gardner was born in Kingston, Jamaica. He grew up in Greenwich Town, Kingston, Bartons and Linstead in St Catherine.

Dr Gardner served as vice-president of the NCU academic administration from 2000-2003.

He has also served at several universities in the US and the Caribbean, including University of the Southern Caribbean, where he served as president between 2004 and 2011.

In pointing to the fact that NCU has built its foundation as a Christian institution, Dr Gardner said, "We are a church-based organisation. The reason this institution exists is not merely to fill the mind with knowledge. Ultimately, we do believe fundamentally that there is a God, and we believe we exist to help young people to find that God. That will not change in this institution."

Dr Gardner pleaded to the politicians, some of whom were present, to make Mandeville a university town.

"Studies have shown that when economic downtime comes, it does not affect university towns, they thrive. So even for the economic well-being of the future, we must establish Mandeville as a university town," Dr Gardner explained.