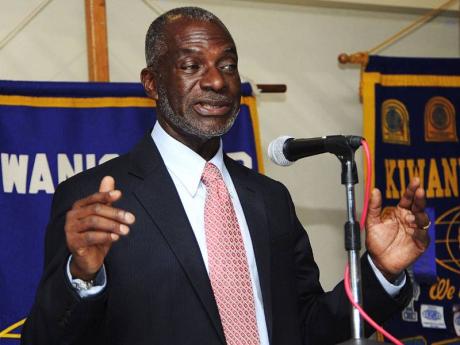 Don Anderson, first vice-president of the Jamaica Olympic Association, delivers his address as the guest speaker at the Kiwanis Club of Kingston's weekly luncheon at The Wyndham hotel, New Kingston, yesterday. - Ian Allen/Photographer

Jamaica's Chef de mission to the Summer Olympics to be staged in London, England, Don Anderson, is anticipating the largest support for the nation's athletes ahead of the Games which will get under way on July 27.

Anderson, who has been part of Jamaican contingents to seven Olympic Games and has led the last five, believes that aside from the large Jamaican diaspora present in England, many other persons are likely to adopt the country.

He added: "The expectations are going to be not just from the diaspora and the Jamaican public, but people from all over the world who have adopted Jamaica for the purpose of the Games, and who just love Jamaica because of the sporting personalities that we have in our presence, headed, of course, by Usain Bolt."

The Institute of Sports chairman and first vice-president of the Jamaica Olympic Association has been involved with every Olympic contingent since the 1988 staging in Seoul, but Anderson concedes that he has never witnessed so much excitement surrounding the Games. He attributed this primarily to the reigning 100m and 200m champion, Bolt, who also holds the World record for both events.

"I have never in all my years of association with the Olympic Games experienced so much heightened enthusiasm, excitement, as we are now experiencing," Anderson revealed.

However, Anderson reiterated his view that Jamaicans and supporters of Jamaican athletes should be guarded against expecting a repeat of the 2008 Olympics where the country captured 11 medals: six gold, three silver and two bronze.

"Immediately after Beijing the United States regrouped and set up a committee and the objective, written or unwritten, is to undercut or to regain sprint dominance; take it back from Jamaica," Anderson said.

"I believe we can repeat, but here we are four years down the road and more than likely the same people that won medals for us are the ones who are going to run again," he added.