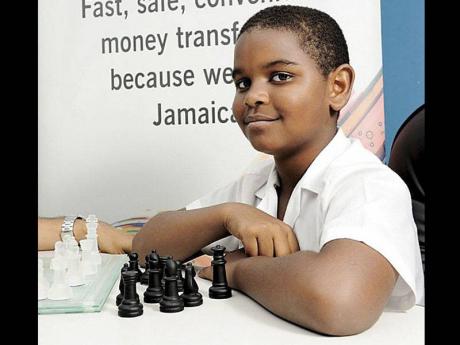 Nine-year-old Leighton Barrett has more accolades in the game of chess than older players have attained in years of playing.

The young chess whiz has garnered numerous trophies since he was introduced to the game as a five-year-old, standing out from his peers at Sts Peter and Paul Preparatory School and among other local chess players in his age group.

Barrett has won several age cohort competitions, including the 2010 Jamaica Chess Open, the 2010 Frederick Cameron Chess Open, as well as the recent Robert Wheeler Open Chess Tournament, in which he placed first among competitors in the rating category 1200 to 1399 across all ages. He also placed third in the 2011 Junior Orange Bowl Chess Tournament in Miami, Florida.

And now he's ready for an even bigger challenge on the international scene, where he's also likely to face much older rivals.

With assistance from JN Money Services Limited (JNMS), which operates the popular JN Money Transfer brand, Leighton will participate in the annual World Open Chess Championship - with some 200 competitors - from July 4-8 in Philadelphia, Pennsylvania, in the United States of America. He departs the island for the championships on June 27.

And, if there was any doubt that he was ready, his sound beating of Gabriel Heron, marketing and business development manager at JNMS, in a mere 10 minutes, on a recent visit to the company, spoke volumes about his skill and confidence.

"I'm feeling good. I'm feeling like a champion," he stated, his shy smile broadening as he was quizzed about his confidence level.

Barrett will join other avid chess players from around the world in the 1200 international rating category, competing for a US$5,000 prize.

"With his great love for the game that makes it a lot easier for me to help him prepare," his coach, Adrian Palmer, comments.

"This will be his first time playing at this level. Therefore, I hope he won't be nervous, which may affect his thinking ability. Once he does what he is supposed to, he should be in the top 10," Palmer declared, adding that the tournament will determine his playing strength.

His mom, Marjorie Barrett, is confident about her son's ability. She recalls introducing him to the game at age five, after he observed his older brother playing at the Wolmer's Preparatory School Chess Club. Young Leighton took a keen interest in the game; and currently he dismisses his 14-year-old brother in a mere three minutes.

"Chess is the thing he loves most," she acknowledged, noting that the Pennsylvania tournament will require all his passion for the sport.

"I want him to do well, I want him to be in the top five at least. I hear it can be very tricky because you have some really serious competitors from the US and other countries and he will be playing against older persons. However, we are hoping that he will be confident and come out on top," an optimistic Barrett added.

DOES WELL IN SCHOOL

She indicated that, despite long hours of practice, Barrett maintains a high average at school, scoring 90s and high 80s across his subjects. He practises about six hours to nine hours per week with his coach and spends about two hours daily playing the game on his computer.

"If he continues along this line, there is a great possibility that by the time he is 14 or 15 he should be a National Master," Palmer reasoned, as he also took a thrashing from his protégé during a game.

"Leighton is an unbelievable talent and we could not pass on the opportunity to contribute to his continued development," says Leesa Kow, general manager, JNMS, during a presentation to Barrett at the company's Trafalgar Road offices in New Kingston recently.

"As a remittance company, we believe wholeheartedly in the development of people, particularly through education, and we see chess is more than a sport; it challenges the mind and inspires our children to be innovative," she underscored.