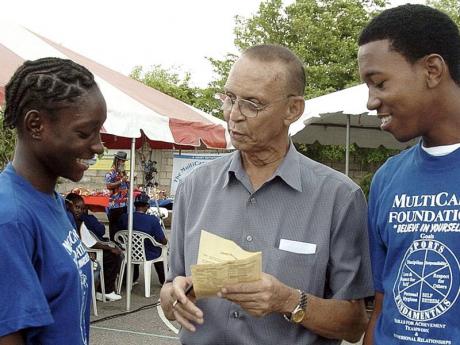 A "pioneer", "outstanding athlete" and "public servant", was how Olympian and legendary sprint-hurdler Keith Gardner was remembered at his memorial service on Monday at the University Chapel in Mona, St Andrew.

The service, which was attended by a number of public officials and dignitaries, including Natalie Neita-Headley, minister without portfolio in the Office of the Prime Minister with responsibility for sports, saw Gardner being showered with praise for helping to build the country's sprint-hurdling tradition and being a coach and mentor.

"His was a life of duty, service and accomplishment, (he) allowed his light to not only shine on his country, but also the world," said Neita-Headley, who read a tribute from Prime Minister Portia Simpson Miller.

"He was a sportsman who laid the foundation for much of the success that Jamaica enjoys today in track and field; and to see him afterwards taking up the responsibility of providing guidance to young people speaks volumes to the man. May his soul rest in peace," she added.

Gardner, who throughout the 1950s was one of Jamaica's top sprinters, is best known for starring at the 1958 British Empire and Commonwealth Games in Cardiff, Wales, where he participated in four events and claimed two gold, one silver and a bronze.

Gardner, who for his many years of outstanding service, was recognised with the Order of Distinction in 1982, also won gold in the 120 yards at the 1954 British Empire and Commonwealth Games in Vancouver, Canada, and a bronze at the 1960 Rome Olympics in the 4x400m relay.

Following retirement from competition, Gardner got involved in sports administration and served in various capacities, including coach of Excelsior High School, and sports director of the University of the West Indies, as well as the Jamaica Constabulary Force.

He also provided dedicated service to the MultiCare Foundation in downtown Kingston, where he taught life skills, community involvement and education through sports.

"He was not just an athlete who brought fame to Jamaica, but also an outstanding public servant, especially for his work with the MultiCare Foundation," said Neville 'Teddy' McCook, who paid tribute on behalf of the track and field fraternity.

Also paying tribute at the service were Dr Jon Jones from Nebraska University, which Gardner attended; Horton Dolphin, former director of sports at UWI; Stacey-Ann Blake, a beneficiary of Gardner's works at the MultiCare Foundation, and Judy Bruce, an administrator, also of the Multi-Care Foundation.

Gardner, who died following a short illness, which included a coronary artery bypass surgery two weeks prior to his death on May 25 at the St Barnabas Hospital in Livingston, New Jersey, USA, is survived by wife, Fay Stiebel-Gardner and three children - Maxine, Christine and Keith Jr.

His funeral was held by his family in New Jersey two weeks ago.