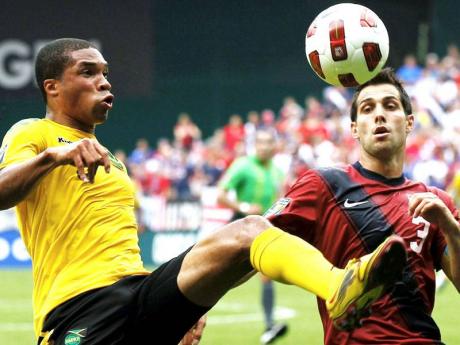 Past expectations that playing Jamaica meant an easy win for the United States (US) have now been replaced by anticipation of a too-close-to-call battle and even anxiety in the American camp that the Reggae Boyz may finally be poised to beat the US in football at the senior level when the countries clash twice in four days during World Cup Qualifying (WCQ) in September.

Current senior US players and at least one former star have upgraded Jamaica's quality, from a team once viewed as an "automatic three points" the Americans "should" get, to a dangerous threat capable of breaking an 18-game winless streak that stretches nearly quarter century.

According to ex-US international Eric Wynalda, who played against Jamaica and is currently a television commentator, the matches between the co-leaders of Group A in the CONCACAF WCQ semi-final round are no longer viewed as a cakewalk favouring the Americans. That is making the US camp uncomfortable.

"I'm nervous about the possibilities," Wynalda admitted while here to cover last Saturday's exhibition game of The World Soccer Masters Tour featuring the likes of Lionel Messi and Didier Drogba.

Although the US have continued to fend off the Boyz to preserve a record of 10 wins and eight draws, including a 2-0 win at the 2011 CONCACAF Gold Cup, the American belief of invincibility, which existed even during Jamaica's most successful era - qualification for the 1998 World Cup - has been dramatically downgraded.

"(In the past,) it was always the feeling that 'OK, we should win this game (against Jamaica). Now this should be a game that (taking) three points always has to be the case'," said Wynalda.

"That was maybe 10, 12, maybe 15 years ago ... . We went through a stage where we did a lot of underestimating the likes of Jamaica and we were burned on it. We were very fortunate to get away with never losing (to Jamaica), but I don't think that will happen again … . There is a tremendous amount of respect for the (Jamaican) players and their abilities."

"The level (of Jamaica's play) is always getting better and it's never an easy game for us," said midfielder Maurice Edu, who was a second-half substitute here last Saturday. "And the fact that they've never beaten us is a surprise, you know, because I think they are a quality side."

The Americans travel to Jamaica for a WCQ on September 7 at the National Stadium. On September 11 both countries meet again in the US. The Americans believe they are ready for difficult games, but claim past encounters will be an asset.

"We faced (Jamaica) recently in the Gold Cup, so we're a little bit familiar with them," said US captain Carlos Bocanegra, a defender who started Saturday. "They're familiar with us. But it's always a tough game when we play Jamaica, especially down there. So it's gonna be a hard game for us."

The American players claim US will play to win both matches. However, they admitted the Jamaicans' combination of speed, skill, strength and athletic ability is a major concern. According to Wynalda, current US coach Jurgen Klinsmann, a former German World Cup star who also coached that national team, could be surprised if he doesn't adapt strategy to not only counter Jamaican conditions, but the Boyz' style of play.

"This is all gonna be somewhat of a learning curve for Jurgen Klinsmann," he explained. "And if Jamaica has an advantage, it will be Jurgen not understanding how these games can go, and making certain assumptions that you're going to be able to go and play an attractive style of football. I think that you're underestimating the Jamaicans.

The US players know the dangers.

Bocanegra, who has more than 100 caps for his country, and Edu, a defensive midfielder, are bracing for Jamaica's attacking assault.

"They have some athletic and some fast players who can create chances," said Edu, who identified Boyz like Ryan Johnson and Dane Richards. "So it's up to us to kinda limit the space that we give them and try to close them down as soon as possible.

"It's important that we go out there and we show them the respect, but at the same time we have to play the same game that we've been playing the last couple of games and really try to execute our game plan.

The first two teams will advance to the CONCACAF final round of WCQ. The top-three finishers there qualify for the 2014 World Cup in Brazil. The fourth-place team earns a play-off for the right to play at football's biggest event. The US expect to see Jamaica in the final CONCACAF round.

"I think we're (US and Jamaica) probably the two strongest teams in the group," said Bocanegra.