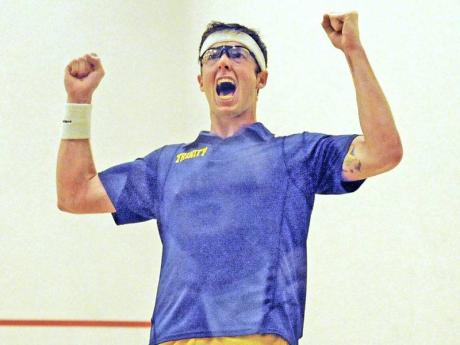 Jamaica's top squash player, Chris Binnie, celebrating after making the winning shot which clinched the victory for his school, Trinity College in the US National Championships earlier this year. - Contributed

The 23-year-old, who had to play a qualifier to enter the tournament, came out on top after upsetting Frenchman Johan Bouquet in the final of the PSA Challenger 5 event, which was held at the Tortola Sports Club in Tortola, BVI.

On the way to his maiden title, Binnie defeated third-seed Australian Josh Cardwell in the quarter-finals and England number-two seed, Robert Downer, in the semi-finals, before getting the better of fourth seed Bouquet 11-9, 7-11, 11-8, 11-7 in the final, which lasted 68 minutes.

Although still relatively new to the pro circuit, Binnie liked his chances going into the BVI Open.

"I was confident that I could do well. I have been training hard, so I knew I stood a good chance. You always have to be confident in your chances or it doesn't make sense to even play," he said.

"As Binnie hit the match ball the crowd burst into ecstatic applause - the first-ever Challenger 5 victory for a Caribbean player - and on home territory too," he said.

"What a fabulous week of squash. We started with the governor of the British Virgin Islands, Boyd McCleary, progressing through the opening round of the qualifiers with a 3-0 victory and we end up with a Caribbean champion - two firsts for British Virgin Islands squash," added the BVI Squash Rackets Association president.

Satisfied with the tournament

"I'm delighted that the club was able to host the first BVI Open. There was great interest from members, a great buzz around the club and I hope it will become an annual event," he said.

"I hope that this event will help to raise the profile of squash in the territory and that it encourages more young people to come out and play. Squash is a great game for kids, in terms of discipline, fitness and sportsmanship."

After an impressive three-year stint on the US college squash circuit, last month Binnie graduated from Trinity College where he majored in environmental science and economics.

Although the transition from college competition to the professional tour has had its challenges, Binnie is pleased with his progress.

"It has been a little difficult transitioning from being in college to playing on the pro circuit, but it's been fun," he said.

"Obviously it's great to be moving up the rankings and I hope that continues. It's going to take a lot of hard work, but I'm happy so far," he added.

The Jamaica Squash Association, in the meantime, also congratulated Binnie, who has been Jamaica's top player in recent years.