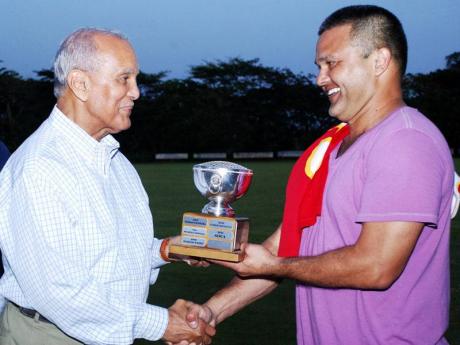 The tournament, which is staged in honour of Kingston Polo Club and Jamaica Polo Association president, Dennis Lalor, attracted six teams featuring a mix of experienced players and some promising youngsters.

Ponderosa was captained by Mark Wates and the team included his wife Susan Wates, Tarik Felix and Chin. The Poderosa farm and equestrian centre, located in Bog Walk, St Catherine, is run by Mark's mother, Betty Wates, matriarch of the Wates equestrian family.

The Ponderosa team clipped Aquilla 6-5 in the first of the three matches, thanks to four goals from Mark Chin and one each from Mark and Susan Wates. Poderosa came from behind to score three goals in the fourth and final chukka.

In the second match, the ICWI team, led by Paul Lalor, defeated Coyoba 5-3. Coyoba, with two goals from Lesley Fong Yee, led 2-0 at the end of the second chukka, but ICWI drew level with goals from young Hamish Wates and Lalor.

Thereafter, the 13-year-old Hillel student Jason Willets, Lalor and Wates again followed up to score and secure the victory, as Fong Yee scored all three for the losers. The ICWI team also included 12-year-old Luke Clarke, whose standard of play belied his age.

In the third match, the green-clad Spring Vale pipped Hurricanes 3 1/2 to 3, thanks to goals by Brian Phillips, Sam Wates and his father, Ricky Wates. Troy Brennan scored two for Hurricanes and Adam Laing one.

In the presentation that followed, Lalor said he was heartened by the fact that so many young people are doing well in polo.

"Thanks to our development programme at the Kingston Polo Club, the future is well secure with these rising stars. Something else I am delighted about is the recent Intercollegiate match between Hillel and the American School ... Polo is now going into the schools and this is good for the development of the sport," he said.

Lalor then presented the trophy in his honour to Mark Wates, the winning captain, and the MVP trophy to Chin.

Adam Lake, who played for Spring Vale in the polo match on Sunday, went on to represent the region in the 2011 World Showjumping finals in Venezuela, finishing third.