Not enough Jamaican music in Europe 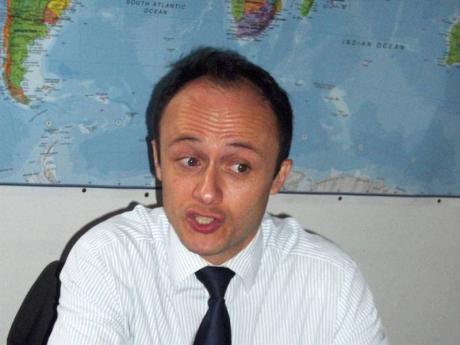 Alexander Walford sits down for a chat with The Gleaner during a workshop in Brussels, Belgium, this week. - Contributed

The policy officer responsible for trade between the Caribbean and Europe at the European Commission says there is rich potential in Europe for entertainers to make a living but says the take-up of opportunities under the Economic Partnership Agreement (EPA) has been disappointing.

Alexander Walford, who was addressing Jamaican journalists during a workshop in Brussels, said there is untapped potential for Jamaican music in Europe.

"I am a consumer and there is a huge demand," Walford said.

He added: "I am going to see Sean Paul perform on Saturday. I have seen Vybes Kartel ... I have seen Wayne Wonder."

Such is Walford's love for Jamaican music he has songs like Popcaan's Party Shat and Vegas' Bruck It Dung on his mobile phone.

"I am a big fan of the music. I am not so keen on some of the lyrics, but that seems to go with the territory. Jamaican music has a big influence in the UK and across Europe."

He said that one of his Romanian colleagues often comments on the popularity of Jamaican music in her homeland.

"I think the potential is very great," Walford said.

Recording artistes are among the 29 categories of professionals allowed to work in Europe under the EPA. The agreement allows the agreed categories to work for three months per year, providing they have contracts with European employers.

Caribbean Export, a Cariforum organisation, is organising a Jamaican event at the time of the London Olympics which will give exposure to many upcoming artistes and other members of the cultural industry.

"It is definitely an area where we see strong potential and there is already an established demand as the brand has already built itself," Walford said.

He said "the demand seems to be almost insatiable" and the more Europeans get exposed to the music the greater the demand will become.

The EU represents a market of 500 million people in 28 countries. Walford said that despite the potential that the big market offers, "it does not look like the take-up has been as great as we would like in large part because awareness is still limited".

"We hope that in time the take-up will increase and that businesses and professionals and artistes will make better use of it," he added.

Walford says a conference is being planned for November in Kingston to help members of the cultural industry use negotiations to secure opportunities in Europe under the EPA.

In the meantime, Walford said there is a need for both Caribbean nations and the EU to work out a framework to deal with the issue of payment for the use of music.

"We are conscious that there is still an issue that needs addressing, which is royalties and the repatriation of royalties. It is not an easy issue to resolve. The Caribbean rights bodies currently have to negotiate with national rights management bodies in the EU," Walford said.

He added that work is under way to ensure that a framework is in place to prevent the 15 Caribbean countries from negotiating with the 27 member states of the EU separately.