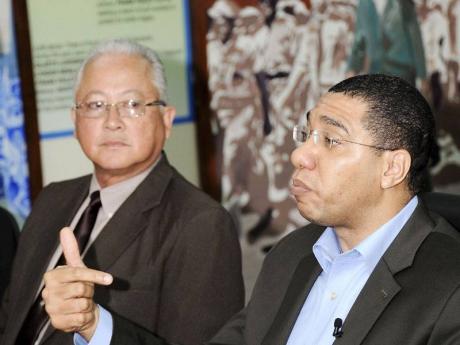 The parliamentary Opposition says Prime Minister Portia Simpson Miller should be held responsible if the Jamaica 50 Independence celebrations are not successfully executed.

Opposition Leader Andrew Holness issued the warning yesterday as he stopped just short of calling for Culture Minister Lisa Hanna to be relieved of her responsibility for the project.

Holness, who was speaking during a Jamaica Labour Party (JLP) press conference at its New Kingston headquarters, said given the importance of the Jamaica 50 celebrations, Simpson Miller should consider taking over responsibility for the initiative.

"The prime minister should consider moving the management of the Jamaica 50 celebrations into her office directly and take direct charge of those operations," he told reporters.

Failing this, Holness said Simpson Miller should take immediate steps to bolster "the agencies and persons" responsible for the execution of the project "so that Jamaicans can celebrate the country's 50th anniversary of Independence with pride".

Holness insisted: "These celebrations are so critical to the national psyche and national pride that where there are issues emerging, the prime minister should step in and take charge."

The opposition leader side-stepped questions about Hanna's handling of the project so far, saying the JLP wanted to see the celebrations come off successfully.

The Jamaica 50 celebrations have been mired in controversy since the change in administration.

Shortly after taking office, the new culture minister charged that there were concerns about how the previous administration spent $23 million that was budgeted for the Jamaica 50 celebrations.

The concerns sparked a request for a special audit of the expenditure by the Auditor General's Department.

However, former Culture Minister Olivia 'Babsy' Grange immediately hit back saying that as far as she was aware, the funds were efficiently and effectively used by the secretariat.

The project was thrown into more controversy recently after it was revealed that a new song had been commissioned at a cost of $1.7 million to serve as the official song of the celebrations.

But Hanna has refuted the figure and said no song has been designated as the official song of the 50th anniversary celebrations.