Tevin Thompson, a batting star in the making 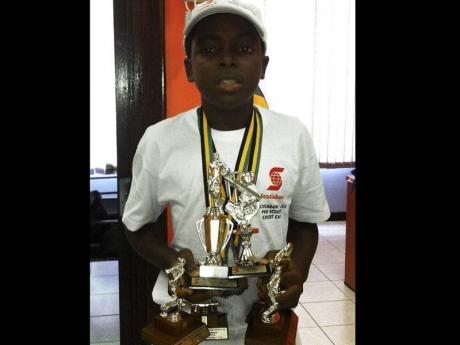 "He sleeps with bat at nights ... . Balls are scattered all around the house ... . He is all about cricket," said Antonette Thompson, as she tries to give The Gleaner an insight into her son's passion for cricket.

"I have been playing cricket from as far back as I can remember," said young Tevin, who resides in Cargin, a little community close to Hampden Sugar Estate in Trelawny. "I was inspired to play cricket by my father (Paul), who also loves cricket."

At the award ceremony in Kingston, the diminutive Tevin, who got two of the three centuries scored in the competition islandwide, received trophies for amassing the most runs - 365, his two centuries - 114 not out and 102 not out, another knock of 80 not out, the highest individual score (114) and the MVP for the county of Cornwall, which came with a $50,000 cheque.

"It was a great season for me and I am happy with the way it went," said Thompson, who also bowls medium pace and spin. "This is the best of my three seasons playing in this competition."

Thompson, who will be leaving St James Preparatory as a champion, is looking forward to a fresh challenge come next year as, having been successful in the recent GSAT Examination, he has earned a place at Munro College in St Elizabeth.

"He is not only a good cricketer, he is also an excellent student," said Mrs Thompson. "He averaged 90 in the GSAT - he got 97 for mathematics, which was the highest mark in his school; he got 95 for social studies, 11 out of 12 for communication tasks, 88 for science and 75 for English language."

Tevin, whose favourite cricketer is Indian batting legend Sachin Tendulkar, is poised to rub shoulders with some of cricket's elite come next month, during the West Indies versus New Zealand Test match at Sabina Park.

"The president of Jamaica cricket (Lyndel Wright) has invited me and the MVPs for the counties of Middlesex and Surrey to be his guests in his private box during the match," said a smiling Tevin. "I am really looking forward to doing that."

While his early inspiration came from his dad, young Tevin, who despite his tender age now represents St James in Under-15 cricket and plays 20/20 cricket for the John's Hall community team, is eternally grateful to his coach at St James Preparatory, Dwaine Humpfrey.