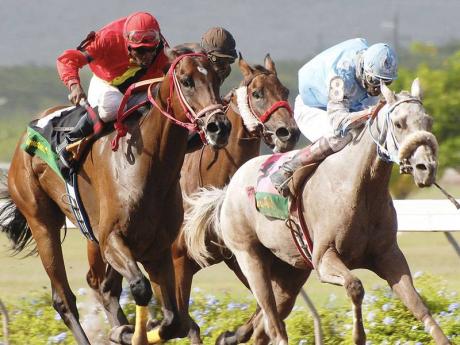 The grey MUMBAI MAESTRO responds to a strong ride from Shane Ellis to catch and beat the front-running 20-1 chance LESTERAE (Dane Nelson) by a neck in the ninth running of the Sports Journalists of Jamaica Trophy race over 1200 metres at Caymanas Park yesterday. MUMBAI MAESTRO won at odds of 7-2. - Colin Hamilton/Freelance Photographer

The grey MUMBAI MAESTRO produced a terrific last furlong run under Shane Ellis to win the ninth running of the $350,000-$300,000 claiming race for the Sports Journalists of Jamaica Trophy over 1200 metres at Caymanas Park yesterday.

Offering odds of 7-2, MUMBAI MAESTRO, toting topweight of 57.0kg, got up in the nick of time to catch and beat the front-running 20-1 chance LESTERAE under leading jockey Dane Nelson by a neck in a field of 11.

MUMBAI MAESTRO found himself outpaced in the backstretch as REGGAE PRINCESS (14-1) and LESTERAE alternated in the lead ahead of MIRACLE CURE (13-1) and the 2-1 favourite RUN CHARM RUN.

But although LESTERAE turned for home clear of MIRACLE RECOVERY and was still full of running a furlong out, he was surprised by the fast-finishing MUMBAI MAESTRO on the inside within shades of the wire.

A five-year-old grey gelding by Burning Marque out of Miss Chacha Dancer, MUMBAI MAESTRO is owned by Gresford Smith and trained by Victor Williams.

Despite having risen 3.0kg in the weights to go with 57.0kg. Williams said he was confident of winning. "I thought the race would be run to suit his come-from-behind style, and he got there just in time under a perfect ride from Shane," said the trainer.

Meanwhile, Ellis was deprived of a second winner after his mount, PERSIAN GOLD, was disqualified in the closing race over 1300 metres for maiden three-year-olds.

Installed a 7-5 favourite, PERSIAN GOLD was not the best away in a large field of 14 and had to weave his way through the field, as the 33-1 outsider MILITARY MOVE (awarded race) made most. But in starting his run on entering the straight, PERSIAN GOLD bore down on WESTERN REGION before getting up in time to pip MILITARY MOVE by a neck.

In-form trainer Howard Jaghai, who saddled two winners on Saturday, was also deprived of another double as a result of PERSIAN GOLD's disqualification.

Jaghai had earlier posted 6-5 chance SHINING GOLD (made most) to win the third race with former champion jockey Omar Walker aboard. Walker, who also won the opening race aboard 6-1 chance GHOST RAPPER, was denied a third winner when his mount HOWGREATTHOUARE was caught on the wire by the very fast-finishing BLACKIE DAVIS (7-1) under champion jockey Dick Cardenas in the fifth race. And the unbeaten American filly HUPOMONE (made all) duly made it five in a row in winning the seventh race over 1000 metres, but just made it ahead of the Jaghai-trained PALACE GOLD.