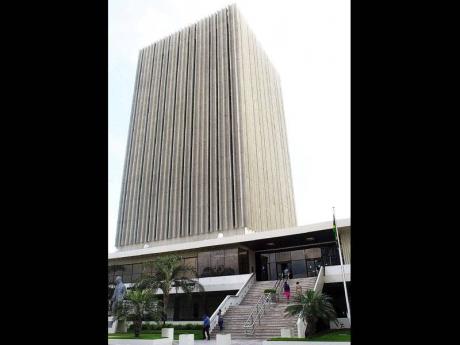 Total loans held by financial institutions are now trending at a record J$374 billion at March 2012, up 8.9 per cent year on year which represents the fastest rise in three years, according to central bank data indicating increased economic activity.

However, the loan growth comes amidst a 25 per cent rise in unserviced loans for three months or more to J$32 billion across Bank of Jamaica (BOJ)-regulated deposit-taking institutions, of which J$23 billion sits on the books of commercial banks.

The banks' gross loans grew 11.3 per cent to J$277 billion and building societies reported a three per cent rise in the value of their portfolios to J$90.2 billion. However, near banks or FIAs dropped 3.5 per cent to J$6.8 billion linked to loan losses at Capital and Credit Merchant Bank.

Loan portfolios contracted by more than two per cent throughout the system in 2010 after anaemic or less than one per cent growth in 2009, when local financial institutions began to feel the full effects of the global financial crisis.

As the local economy crumbled, so did jobs and businesses, leading to a rise in non-performing loans or NPLs.

The J$32.158 billion of NPLs is a new record, but is not at threat levels - representing just 8.6 per cent of total loans; and even less, 3.8 per cent, once provisions for bad debts are factored. Comparatively, in the financial crisis of the 1990s, NPLs represented, at times, half of the total loan portfolio.

Relative to the December quarter, NPLs are also reasonably flat, falling nominally by J$22 million from J$32.18 billion; and proportionally, by 30 basis points from 8.9 per cent of total loans to 8.6 per cent.

Still, at the epicentre of the credit market, commercial bank NPLs ticked up slightly in the quarter by J$91 million to J$23.356 billion, but were proportionally lower at 8.4 per cent of total loans in March, compared with 8.7 per cent last December.

The two largest banks, which are traded on the stock market, reported combined past due loans of about J$38 billion in their last audited accounts for year 2011, but just J$18 billion met the central bank's criteria for non-performance.

"The finance and insurance services industry is expected to grow in 2012. This performance is predicated on increased economic activities as the continuation of low interest rate should spur growth in loans, as well as increase business confidence," predicts the Economic and Social Survey Jamaica 2011, published last month by the Planning Institute of Jamaica.

The average monthly loan rates at commercial banks in 2011 was 18 per cent or two percentage points lower than a year earlier.

The financial institutions also reported a pre-tax profit margin of 18 per cent led by building societies at 29 per cent.

The nation's 42 credit unions will be added to the BOJ's portfolio, once legislation is finalised.