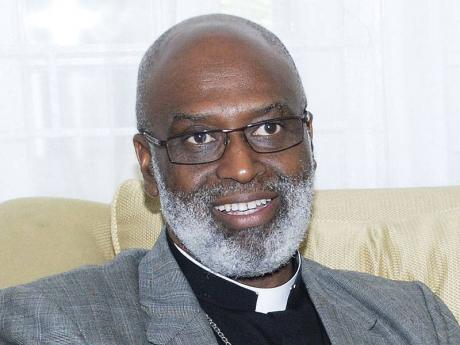 The Archbishop of Accra is an impressive man. As he preached the homily on Sunday to thousands of Catholics gathered in the National Arena to celebrate 500 years of Christianity in Jamaica, the Most Rev Charles Palmer-Buckle took off his bishop's mitre and made a statement startling to many, which was not in the official text of his address.

He said that as he looked out at us, a "very beautiful rainbow-coloured people", he was personally both sad and rejoicing. He was sad, he said, because his ancestors had sold our ancestors into slavery; he then apologised for that, and humbly begged our pardon. He rejoiced, he said, when he saw what we have become! God works in mysterious ways, he declared!

Next, with quite a good voice, he sang the Redemption Song ("Old pirates, yes they rob I ...") to rapturous applause, while the throng of thousands joined in to complete the resistance anthem. "Emancipate yourself from mental slavery ... ." Then he put back on his mitre.

It was a good homily and a good day - a good way to celebrate 50 years of Independence, and 500 years of Christianity in Jamaica.

The vast majority of Catholics in Jamaica are of African descent, and large numbers of us originate from what is now Ghana. Archbishop Palmer-Buckle remarked privately that many Jamaicans he had met bore striking resemblance to people he knew at home; he would have to tell them that they had doubles in Jamaica.

He advised that when he became a bishop, there were nine dioceses in Ghana; now there are 19, and one Apostolic Vicariate. There are several hundred Ghanaian young men currently in training as priests in his country, and he promised to send some to Jamaica to help out with our shortage.

He explained the dramatic increase in numbers in terms of the church's evangelisation strategy, using large numbers of well-trained catechists to spread the word and to teach in the outlying villages. The church has been successful in making the Word of God incarnate in African culture by Christianising traditional African rites of birth, circumcision and puberty. Catholic worship was fully African, with drumming, dancing and singing, as well as prayer and meditation.

Here in Jamaica, we hastened to indigenise the church in the 1960s and '70s, decorating our vestments and churches with Jamaican motifs and art, and using dance and mento music in our worship, complete with guitars, drums and the like; but we haven't advanced much since then.

Archbishop Palmer-Buckle explained that they have moved to the next step, which is to Africanise their theology - not new in its essential content but new in its expression. His visit will challenge us here in Jamaica to continue to make the Word of God incarnate in Jamaican culture.

Africa has had dozens of Catholic political leaders, including Kwame Nkrumah, John Evans Atta Mills (the present president of Ghana), and Julius Nyerere of Tanzania. In fact, Nyerere was a deeply devout man, whose cause for sainthood is being actively pursued in Rome.

Incidentally, several Jamaicans prominent in our history have been Catholic, and as we celebrate we need to recognise them. Marcus Garvey was a strong Catholic, as was Mary Seacole and Claude McKay (who actually worked for the Catholic Church in New York). Formerly a noted communist, one of McKay's poems contains this line:

"For Passion and all the pleasures it can give will die the death;

But this of me eternally must live, thy borrowed breath."

Peter Espeut is a sociologist and Roman Catholic deacon. Email feedback to columns@gleanerjm.com.