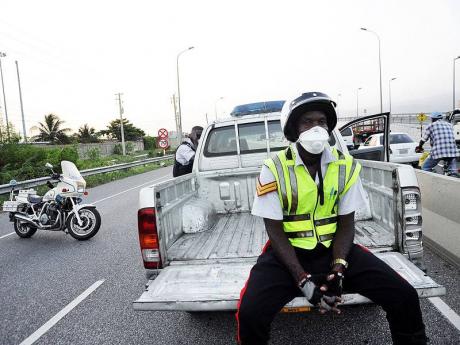 A policeman, protecting himself from hazardous fumes with a gas mask, monitors traffic along Marcus Garvey Drive in Kingston yesterday. 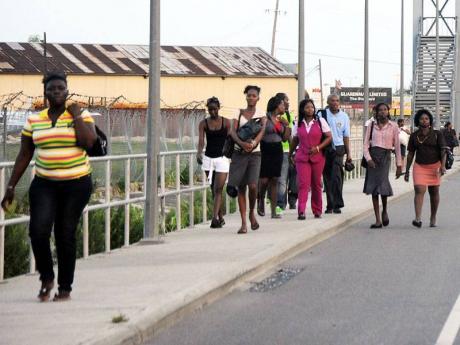 Commuters walk along Marcus Garvey Drive because no buses appeared to be running along the route after a nearby gas leak yesterday afternoon. - photos by Ian Allen/Photographer
1
2

Mysterious fumes yesterday swirled over the usually hectic commercial hub of Newport West and its environs, triggering mass evacuations of workers from affected areas, even as others had to seek medical attention.

The gaseous emission sparked the rapid closure of roads leading into Portmore, St Catherine, leaving a large group of experts mystified late in the day.

Up to late yesterday, the health ministry said it had received reports that five persons had sought medical assistance after inhaling the "hazardous" fumes.

"They are now doing well and the team is still trying to identify the substance," said director of emergency disaster management and special services in the Ministry of Health, Dr Marion Bullock DuCasse.

Declaring she was puzzled by the seemingly inexplicable source of the smelly fumes, Bullock DuCasse said teams from the health ministry were continuing to rove some communities.

"They are carrying out checks to ascertain whether we have any reports of anybody being affected, some residents are saying they have smelled a strange odour, but we from health continue to monitor the situation."

The health ministry personnel were joined by professionals drawn from the Office of Disaster Preparedness and Emergency Management (ODPEM), the National Environment and Planning Agency, the Jamaica Fire Brigade and the police.

As they descended on the area to locate the source of the fumes, locations in proximity to Newport West were closed off as the team feverishly went to work. However, up to late evening, their efforts yielded nothing.

Executive Director of ODPEM Ronald Jackson admitted that he was baffled by the team's failure to unearth the source of the smell late in the day.

"I don't know what to tell you. We are still trying to find the source of it. We have investigated all the possible locations but we came up with nil," he said.