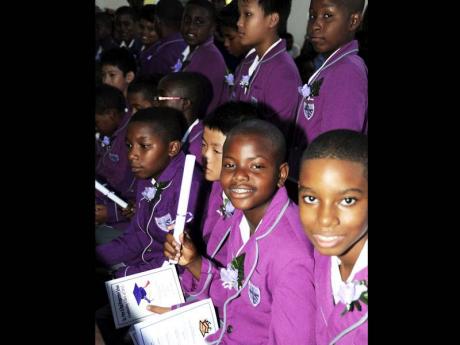 Yesterday, the Sts Peter and Paul Preparatory School Class of 2012 took another step forward as they climbed the ladder of success, having been the 49th batch of students to graduate from the institution.

The graduation ceremony took place at the Sts Peter and Paul Catholic Church in St Andrew.

Karen Siyanbola, Sts Peter and Paul Prep principal, lauded the graduates for their achievements as 90 per cent of them passed for traditional high schools with the top boy and girl receiving 98 per cent averages, respectively.

"They are a combination of brilliance, creativity and talent. Let me say they weren't very excitable as well, in the sense that we did not have a lot of highly strung behaviours from them. They certainly excelled to me," Siyanbola told The Gleaner.

She also took time to commend Selena Blythe, who won several prizes during the ceremony, such as the André Hylton Award, for the Girl with the Highest Average in the Grade Six Achievement Test (GSAT) at the institution, and the Don Reece Award for Academic Excellence, as she had the highest overall average throughout the 2011-2012 school year for the class of 2012.

"Selena has been brilliant since she was in kindergarten, and all of her school life she has achieved excellence. I am certainly proud of all of the graduates. There are some who have truly improved and their accomplishments have shown that they can achieve whatever they put their minds to," Siyanbola said.

The 11-year-old, who will be heading to Campion College at the start of the new school year in September, was surprised, however, to have won that many prizes.

"I feel so good I can't even describe it. My mom worked extremely hard with me in studying. It was a combination of waking up early in the morning and studying before I went to school or other times when I stayed up late," she said. "In high school, I know I'm going to do just as I did in prep school. I'm going to soar like an eagle and not follow any bad company. I'm going to be myself."