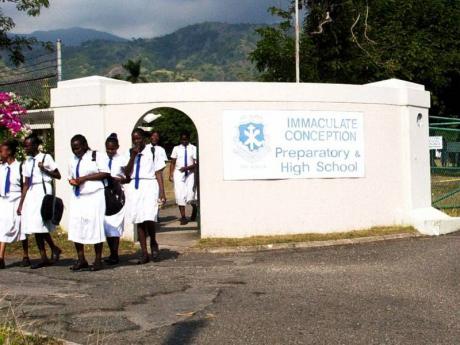 Immaculate Conception High in St Andrew has seen a flood of requests for transfers. - FILE

Despite Education Minister Ronald Thwaites' insistence that parents and students should accept their school placements in the wake of the Grade Six Achievement Test (GSAT) and "grow where they are planted", a number of traditional high schools are being flooded with transfer requests as in previous years.

Kingston College (KC) is reporting more than 200 requests for the 30 spaces they have set aside for transfer requests.

"Even before the GSAT results were published, we got applications for over 100," said Everton Burrell, acting principal at KC.

"That figure has now more than doubled, with even requests from students who were placed at some top traditional high schools. This is not unusual, but what we are seeing more of is students with very high grades who have been placed in schools that are not considered traditional."

Kali McMorris, vice-principal at St Hugh's High School, told The Gleaner that it was not even possible to consider any of the close to 100 transfer requests that institution received because the Ministry of Education sent more GSAT students than they requested.

"At this stage, the majority of our GSAT awardees have already registered, so we don't even see any available spaces left," said McMorris.

The situation is no different at Jamaica College (JC) with 200 written (and 300 overall) enquiries coming in for the 14 spaces the school had reserved.

"The students that we get here now have high-90 averages. We are aware that the averages have improved this year, but there are just not enough spaces within the traditional high schools, so we are under pressure like everyone else from parents requesting transfers," said JC principal Ruel Reid.

Immaculate Conception High School has had to post numerous 'No transfer' signs on the school compound.

"Requests have been coming in long before the GSAT results come out, sometimes even before the children do the GSAT, so by the time the results come out we put up 'No transfer' signs because we already have enough applications to fill any available space. But people still find a way to get requests in," said Aba Polson, vice-principal at Immaculate.

The principals said they sympathised with the parents and try as best as possible to accommodate them and explain the situation.